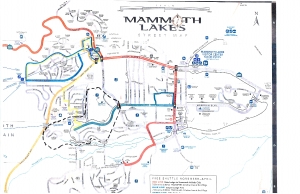 The power outage area is outlined with a black dotted line.

On New Year’s Eve, Edison crews were at work on part of the community’s electrical system when they discovered a problem with a main line switch.  That problem had not yet caused an outage, so officials decided to schedule down time after the holidays.  That time is Tuesday.

Dan Brady of Edison in Mammoth Lakes said that during the New Year’s Eve work, crews discovered the main line switch did not contain the appropriate level of gas that is required for it to function.  To avoid outages during the big holiday week, Edison waited.

Brady said a planned outage is always better than an emergency power failure.  He said Edison crews hand delivered more than 1100 notices to customers to let them know power would go off at midnight through noon Tuesday.

The outage area takes in Sierra Star Golf Club on the north, Juniper Court on the west, Waterford on the south and Villa Vista Place on the east.  Edison provided phone numbers for customers who may want contact about the outage.  SCE notified the Town of Mammoth Lakes that an emergency switch replacement would be taking place on midnight Tuesday, January 10th lasting approximately 12 hours until noon on Tuesday.

Please open the link for more information and to review a map of the approximate area affected. http://www.ci.mammoth-lakes.ca.us/CivicAlerts.aspx?AID=128.