By News Staff on April 27, 2012 in Government Agencies/Utilities 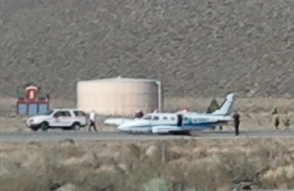 From Stuart Brown of the Town of Mammoth Lakes –

The aircraft was towed from the runway, allowing Alaska Airlines Flight No. 2196 from Los Angeles to land at approximately 4:53 p.m.

Long Valley Fire Chief Fred Stump said that the statement from the pilot was that he thought his landing gear was down. He said he heard no alarm indicating that it wasn’t.  Chief Stump said that the plane did not actually crash but skidded along the ground.  He said that there was no fuel leakage, although the propellers were damaged.

Chief Stump said the pilot and his wife got out of the plane,  carried their own luggage and declined medical treatment.  The wife was heard to comment that this was “the softest landing without landing gear that we’ve ever made.”

What’s the story with the high speed chase from Mammoth to Bishop?

I’m sure its just coincidence but I notice this happened at 4:20 pm. Sure am glad nobody was injured.

Why the hell would you make a reference to 4:20pm. There is nothing in the article referencing drugs.

Because Joe a lot more people 4:20 than is known, also because I can.