By News Staff on June 3, 2013 in Government Agencies/Utilities 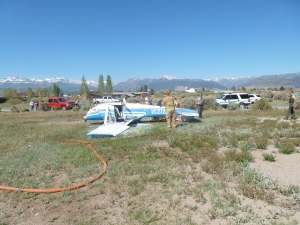 On the morning of Sunday, June 2, 2013, at approximately 9:30am, Mono County Sheriff’s Dispatch received a call regarding a possible airplane crash at Bryant Airfield in Bridgeport.

Personnel from the Mono County Sheriff’s Office, Bridgeport Fire Department, US Forest Service Fire Department, and Mono County Paramedics were dispatched to the scene. Upon arrival, it was confirmed that a 1972 single engine Cessna plane had crashed at Bryant Airfield and was resting on its roof. There were four passengers in the plane. One passenger was transported via Care Flight to Renown Medical Center in Reno for treatment of their injuries. The other three passengers were transported via ambulance to Carson Valley Medical Center in Carson City for treatment of their injuries.

The cause of the crash has yet to be determined and is currently under investigation by the FAA.