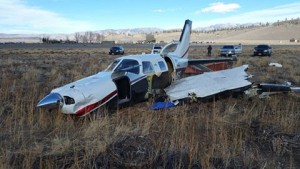 A Piper Mirage attempted to take-off from the runway with winds estimated at approximately 35 knots. On board was the pilot, Gerald Blank, and his passenger, Lawrence Gallego – both of San Diego. The pilot sustained minor injuries when the aircraft hit the ground and plowed through the segmented circle at mid-field.

The FAA and NTSB have been notified of this accident and will be conducting their investigations into the crash. The Mammoth Yosemite airport re-opened at 2:30 PM.