Saturday was a good day to be a “Piner.” The Big Pine Volunteer Fire Department threw a party to celebrate the grand opening of its new engine bay, a 2,000 square foot structure with garage doors tall enough to admit high-clearance engines and water tenders and gear for all 35 of the department’s volunteers. 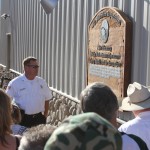 Chief Damon Carrngton reads off the names on the department’s memorial plaque.

Festivities Saturday afternoon included a barbecue, life music from Rearview Mirror and an official unveiling of a department sign and building plaques.

It appeared as if the entire community turned out, but counting noses was nearly impossible as locals, representatives from Bishop, Independence and Lone Pine departments and CalFire moved in waves from the parking lot with all the department’s rolling stock spit shined and on display to the original fire house and onto the new structure. Locals Kevin Carunchio, Inyo County Chief Administrative Officer, District 4 Supervisor Mark Tillemans and Sheriff Bill Lutze were also on hand. 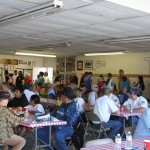 Half of the Big Pine population enjoys burgers, hot dogs with the traditional sides donated by Country Kitchen while the other half waits in line.

Fire Chief Damon Carrington provided the background of the new bay, starting with a list of past chiefs and a board of commissioners with the wherewithal to save the $352,000 needed for the new structure on a $220,000 annual budget.

Carrington noted the effort that went into the new engine bay, including the weekly volunteer work, Al Sterling’s building plaque, David Coleman’s contribution of rocks for the sign on U.S. Hwy. 395 and CalFire’s camp crew of woodworkers. 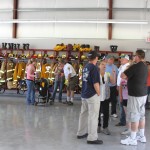 The chief outlined future plans for a dual purpose engines and a remodel of the original fire house to include a museum, office space and an official meeting room. The biggest audience reaction came at the introduction of Rick Coffman, Lloyd Wilson and the recently-retired chief John Marzano with a total of 135 years on the department. 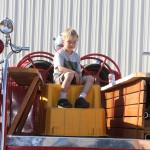 The next generation of Big Pine firefighters Kevin Freeman, 4, on the department’s 1946 fire engine. 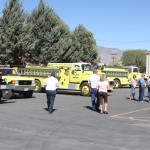 This was a great celebration, I am so impressed with the dedication people of Big Pine have for their community. I was also blessed to meet Mr. and Mrs. Lloyd Wilson. It was exciting to meet the parents of Dr. Allison Robinson, the highly trained surgeon from Big Pine who… Read more »

Ohhhhhhh, PINERS! Now I get it.