The phone book known as High Sierra Phone Directory has circulated in Inyo-Mono for a number of years, with lots of local advertising. The company that produces that phone book and many others, known as PDC Pages, has captured the news 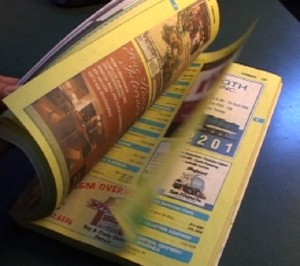 High Sierra Phone Director distributed in the Eastern Sierra is published by PDCpages.

spotlight in Alaska recently where the distributor of the phone books filed a fraud complaint with the Alaska attorney general, alleging that PDC Pages printed far fewer phone books than promised to advertisers.

The distributor told a CBS news station in Anchorage, Alaska, that PDC printed roughly 40% fewer phone books than promised. The news station reported that PDC did not notify advertisers that the number of printed books was cut substantially.

The parent company prints phone books in 17 states, including California. The Alaska distributor suspects PDC might have cheated other areas. The Alaska Attorney General is in the process of reviewing and investigating the consumer claim. The CBS station in Anchorage, KTVA, now reports that the investigations into PDC have spread to California, Oregon, Idaho and Washington.

Meanwhile, in the Eastern Sierra, locals heard about the Alaska investigation involving PDC. Some residents and business owners here said they did not receive a High Sierra phone book this year, which made them wonder about the distribution. One reliable source indicated that PDC may have delivered far fewer phone books to the Eastern Sierra than in the past.

We have placed calls to officials of PDC to respond to the Alaska fraud claims and to ask about distribution in Inyo-Mono. A public relations representative assured us that the Ziplocal CEO would speak to us. Ziplocal, headquartered in Utah, apparently owns PDC Pages.

We work to provide daily news to all of the Eastern Sierra, in the tradition of Eastern Sierra News Service and the Sierra Wave. We bring you daily happenings, local politics, crime, government dealings and fun stuff. Please contact us.
View all posts by News Staff →
Final Vote Counts Change No Elections
Half Dome Cables Open Wednesday