By News Staff on November 16, 2012 in Government Agencies/Utilities 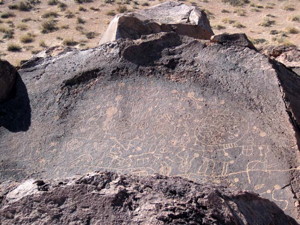 According to the Bureau of Land Management, someone has damaged or stolen petroglyph panels at five locations in a major rock art site within the volcanic tableland north of Bishop.  BLM has offered a $1,000 reward for information leading to the arrest and conviction of those responsible for the petroglyph damage.

In a press release, BLM Field Office Manager in Bishop Bernadette Lovato said, “The individuals who did this have destroyed an irreplaceable part of our national cultural heritage.”  Lovato said BLM has increased surveillance of the sites and is working with other agencies to catch the culprits and recover the petroglyphs.

The rock art site, according to BLM, is protect3ed under the Archaeological Resources Protection Act and is listed in the National Register of Historic Places.  BLM says the site is one of the most significant rock art sites in the region and is still used by the local Paiute Tribe for ceremonies.

Greg Haverstock, BLM Bishop Field Office Archaeologist is quoted as saying that the rock art in question “clearly portrays the activities that occurred at the site during the past 3,500 years.”

We work to provide daily news to all of the Eastern Sierra, in the tradition of Eastern Sierra News Service and the Sierra Wave. We bring you daily happenings, local politics, crime, government dealings and fun stuff. Please contact us.
View all posts by News Staff →
Plan for more geothermal
MCWD/LADWP sit down for more talks
10 Comments
Newest
Oldest Most Voted
Inline Feedbacks
View all comments

I think the reward should be $20,000, that is what the first offense fine is … $1,000 is not even worth the time and effort for someone who is motivated by monetary gain to rat these guys out. That is what it is going to take to get them, make… Read more »

Up the reward someone will talk. As someone else said “No honor among thieves”.
The $1000.00 reward is insulting. Shame on the BLM, you’re all getting good pay, donate towards the reward. Same goes for the Tribe.

There is no honor among thieves! To me this is another reflection of how much that precious lifestyle and culture is in the past. I say it is precious because in compared to our current lives we are hurting each other and our whole planet directly and indirectly. It is… Read more »

Wow, I think I just heard a blurb about this story from the BBC. They mentioned that the thieves used power saws. I am waiting now for the whole story.

I’m sure with a little investment in time they could be caught.

The reward should be 10k

That area has been the frequent site of locals….getting drunk and partying and taking pot shots at the petroglyphs. Had a chat with one of the folks in a local watering hole and he was quite proud of himself and his buddies.

Obviously the individual(s) who stole this never saw The Brady Bunch episode where Greg Brady (or was it Peter Brady?) took the rock medallion thingy and was cursed with bad luck and almost drowned on a 2 ft wave. All joking aside, this is a major bummer. What the hell… Read more »

This is so sad, I agree, I hope they get caught! But I doubt it was tweakers Ferdinand, yeah they pretty much will steal anything, but this was done by someone more motivated, I’m sure. The same kind that dig up and sift sites, and haul stuff off. GRRR

This violation of our local history and the Paiutes’ ceremonies breaks my heart. $1,000 is seems meager as a reward but I understand BLM’s limitations. Hope someone knows something and the perpetrator(s) are caught. So sad.