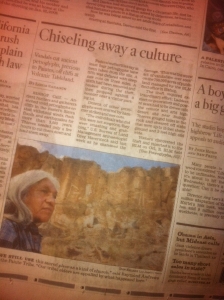 The Los Angeles Times, NBC News and even the BBC have reported more details on the vandalism and theft of ancient Paiute Indian petroglyphs from an area in the volcanic tablelands north of Bishop.

LA Times reporter Louis Sahagun wrote that at least four petroglyphs were cut out of the rock and stolen and dozens of others were scarred by “hammer strikes and saw cuts.” The Times story says it was visitors who found the vandalism and reported it to BLM. According to the Times, the thieves used ladders, electric generators and power saws to steal the ancient art. The story says they “gouged holes in the rock and sheared off slabs that were up to 15 feet above ground and 2 feet high and wide.”

The petroglyphs and the entire area are sacred to the Paiute Tribe. On the BBC news website, NBC News US spoke to Raymond Andrews, the Bishop Paiute Tribal Historic Preservation Officer about the petroglyphs. He said that the ancestors “etched messages in them, so they are sacred. People go and pray to them and try to seek guidance,” said Andrews.

The story quotes BLM Archaeologist Greg Haverstock as saying that there is an elicit market for any archaeological relic but he estimated the dollar value between $500 and $1500.

Raymond Andrews was also quoted as saying, “Like other indigenous groups, we believe in karma. Something is going to happen. We can try to investigate, but some things are out of our hands.”

In Bishop, BLM has stepped up surveillance of the area and offered a $1,000 reward for information leading to the arrest and conviction of the thieves. Call 760-937-0301.