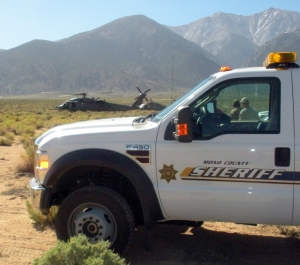 On the afternoon of Wednesday, June 12, 2013, at approximately 2:15pm, Mono County Sheriff’s Dispatch received a call regarding a potential mutual aid search and rescue on Boundary Peak, out of Esmeralda County, NV, for a 54-year-old stranded hiker. 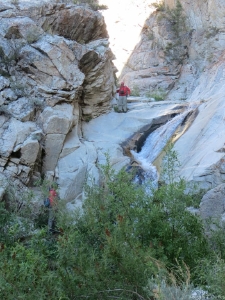 On Wednesday, June 12, 2013, a 54-year-old hiker from Glencoe, IL, was descending from a day hike to Boundary Peak. He lost his descent route and walked about 3000 feet down steep/loose terrain on the wrong side of the peak. He became stranded on a near vertical edge. He was able to call 911 for help. He did believe he would be able to climb off the ledge, back up the mountainside. Through communication with Esmeralda County Sheriff’s Office, the US Forest Service, and the Mono County Sheriff’s Office, he stated he had climbed about 1000 feet and “thought” he knew where he was. He was advised to go east into Trail Canyon, back to his car, when he was able to get back to the ridge top. There was no further communication with the hiker. Since Esmeralda County does not have a search and rescue team, Mono County Sheriff’s Search and Rescue (SAR) team and Mineral County Search and Rescue team were put on standby until the hiker was indeed confirmed off the peak. Esmeralda County Sheriff’s deputies advised they would check the hiker’s car, parked at the trailhead in Trail Canyon, the next morning to ensure he had found his way down.

On the morning of June 13, 2013, it was determined that the hiker had not returned to his car and a search and rescue was formally initiated by Esmeralda County asking for ground and air resources from the Mono County Sheriff’s Search and Rescue team. Search support included two air force rescue HH-60 from Nellis Air Force Base in NV; CHP A-Star H-40 helicopter; a quad team from Mineral County; and ground teams from Mineral and Mono Counties. Emergency management agencies from California and Nevada were also contacted for additional resources, should they be necessary. The search was conducted throughout the day for the missing hiker with no success.

On Friday, June 14, 2013, two HH-60 helicopters began a search of each side of the peak with ground teams beginning to hike the last known point. At approximately 11:00am, air crews advised they had located the missing hiker walking down the mountainside. A flight medic was lowered to the hiker to begin medical treatment. They were airlifted out where the hiker was then flown to Southern Inyo Hospital for treatment of minor injuries and dehydration.

We work to provide daily news to all of the Eastern Sierra, in the tradition of Eastern Sierra News Service and the Sierra Wave. We bring you daily happenings, local politics, crime, government dealings and fun stuff. Please contact us.
View all posts by News Staff →
Caltrans will spend close to $9 million here
MCWD and LADWP reach tentative agreement
1 Comment
Newest
Oldest Most Voted
Inline Feedbacks
View all comments

I’m roughly the same age as this guy and I realized a few years back that hiking or biking ALONE in those mountains is a big no-no. I would hate to foot the bill for all that aircraft and ground personnel that were involved looking for this dude. It is… Read more »