By News Staff on October 19, 2013 in Government Agencies/Utilities 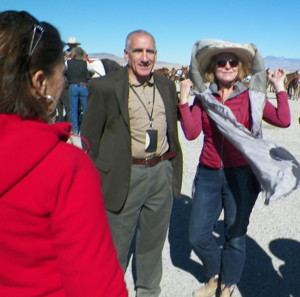 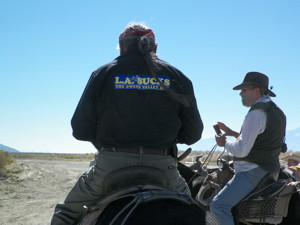 Traveling  all  the  way  to  Los  Angeles  took  some  serious  effort,  involving  some  serious  logistics.  To feed  and  water  mules  and  people  alone  would  have  been  a  challenge,  but  getting  all  of  the 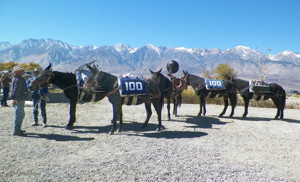 approvals  from   government  agencies  and  private  land  owners  to  traverse  the  240-­‐mile  trip  for  27  days  along  the  L.A.   Aqueduct  was  a  considerable  achievement  all  on  its  own.  Bon  hopes  the  performance  will  remind  Los   Angeles  residents  that  they  have  been  receiving  water  from  the  Owens  Valley  for  100  years.      Interested  readers  can  follow  the  100  Mules  Walking  the  Los  Angeles  Aqueduct  performance’s  progress   at  a  special  Facebook  online  site   https://www.facebook.com/OneHundredMulesWalkingtheLosAngelesAqueduct.

We work to provide daily news to all of the Eastern Sierra, in the tradition of Eastern Sierra News Service and the Sierra Wave. We bring you daily happenings, local politics, crime, government dealings and fun stuff. Please contact us.
View all posts by News Staff →
Kathy Henderson: 1933-2013
Future of Green Church discussed
9 Comments
Newest
Oldest Most Voted
Inline Feedbacks
View all comments

I’d have to say that my favorite historical passage is one depicted in an old Inyo Register beneath an image of four children and their widowed mother. It reads… This woman’s husband, the father of this little family, broke under the strain of this valley’s water troubles, facing ruin for… Read more »

I believe W.A. Chalfant and Will Rodgers and so many others who have documented the devastation of the Owens Valley. I knew Mary Gorman, the sister of the Watterson brothers who tried to fight the complete drain of water. She verified the destruction. Thank you, Ron Alexander for so eloquently… Read more »

What comes around....
Reply to  Ron Alexander

Meanwhile, Lieut. Robert Daley, having returned from the Owens Valley, reported on conditions there: – December 3, 1863 “Sir: In accordance with orders from headquarters Department of the Pacific, I have the honor to make the following report relative to the Indians in Owen’s River Valley: I found Indian supplies… Read more »

Art? Really? A political statement or a form of protest, even a means of educating the public I will buy, but this is emphatically not art. Where does such silliness come from?

This is a powerful ironic piece of art, it’s especially moving to see James Yannotta and Lauren Bon standing there together.
By the way; the Mules are absolutely beautiful!
I love the 100 blankets!
Best of luck on your journey!
Mongo

” Use of the mules to symbolize the 100th Anniversary of the Aqueduct was a natural choice. Without the hundreds of mules used to build the aqueduct, it is unlikely it would have ever been built. Stubbornness has also been a common hallmark of the relationship between valley residents and… Read more »

Michael, thank you for that very eloquent comment. James Thurber said, “Let us not look back in anger, nor forward in fear, but around in awareness.” Let’s hope that this very brilliant, creative and masterful performance by Lauren Bon has the effect of creating greater awareness of those of us… Read more »