By many accounts, the 2010 general trout opener went off without a major hitch. Often a cold and windy spring day, this time the opener gave anglers better weather than in their dreams with clear, calm, and warm conditions marking the day.

At Intake II, the popular fishing hole on Bishop Creek, Bob Todd spoke with anglers there on Saturday. Most people had left Intake II by mid morning, but it was a good thing since the anglers had to call it an early day due to quickly catching their limit.

Rick and Patti at the Lake Sabrina Boat Landing report that the water is low, and the ice is thick, but that did not stop fishermen from taking home limits and catching and releasing far more. One father and son reportedly drilled more than 30 holes on their way to catching 68 fish. Others reported personal one day totals counted in dozens.

The report from Crowley Lake Fish Camp indicates a good opener as well. The economy may have slowed down the number of anglers at Crowley, but the rough estimate is that there were as many boats on the water as there were last year on opening day. For those that did get out on the water, the report is that most of the fish coming out of Crowley were in the three to four pound range.

There were concerns early on that stocking would be delayed due to a lawsuit that required Fish and Game to seek out sensitive species before the fish could be planted. Fortunately Fish and Game crews were able to clear and plant most major waters in time for the opener.

Convict Lake wasnt cleared for stocking until Thursday before the opener, but Brian Balarsky owner of the Convict Lake Resort, reports that Fish and Game staff from the Fish Springs 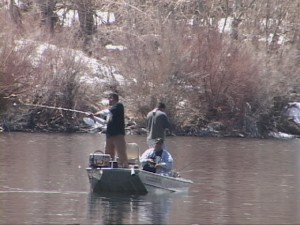 Hatchery were able to stock a lot of trout before the opener. This was a good thing because Balarsky said that there were anglers lined up to get into the parking lot when it opened at 4:00 am. Trout up to 5.8 pounds were caught with loads of full stringers reported. A trout derby at Convict Lake runs through June 12th. You can get more information on the Convict Lake Resort website, or just stop in the General Store at Convict.

In Bishop, the Chamber of Commerce revived the Rainbow Trout Festival in the Bishop City Park. Anglers could bring in their trout for display on ice and enter to win prizes like rod and reel combos. Tawni Thompson with the Chamber reports that over 70 people entered trout into the contests, which meant that just about everybody who entered a fish went home with something.

We work to provide daily news to all of the Eastern Sierra, in the tradition of Eastern Sierra News Service and the Sierra Wave. We bring you daily happenings, local politics, crime, government dealings and fun stuff. Please contact us.
View all posts by News Staff →
Cartago Shooting Incident Still Cloaked in Mystery
Fire at Mammoth Lakes Condo