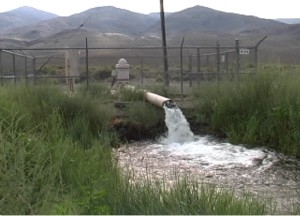 Public interest has waned hugely, and the Inyo Supervisors still scold those people who do criticize the water issue that drags on with the key question still unresolved – when and how do officials turn off Los Angles pumps to protect the environment.  This issue was slated to come up again at an Inyo-LA Standing Committee meeting at DWP headquarters in Los Angeles.

At their last meeting, the Inyo Board of Supervisors received a letter from the Inyo Water Commission asking about the long delay in agreement on a new plan to control pumps.  For several years, Department of Water and Power and Inyo staff people have huddled over revision of the Long Term Water Agreement method to control pumps.  Both sides have agreed that the method in the agreement, largely measuring soil measure, has not worked and damage has been done.  The two sides have not come to terms on a new plan.

At the Board meeting, Supervisor Linda Arcularius said the so-called Green Book of pumping controls has “not been forgotten.  We’re trying to figure out how to move forward,”  she said.  Board Chair Susan Cash said that maybe there will be a “renewed commitment at the Standing Committee meeting.”  Cash seemed to favor what she called a “reaffirmation that this issue is on the radar of policymakers and not just a presentation every four months.”

None of the officials voiced the unspoken fear – that DWP will never accept the logical conclusion that the level of groundwater tables must be used to judge when pumps go off to protect plants.  Inyo never got that concession in the original Long Term Agreement, and most believe DWP has no incentive to agree now.