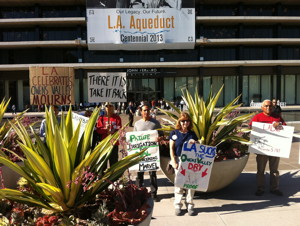 Owens Valley Residents Mourn 100 years of Colonial Rule and Resource Exploitation
Approximately 25 residents of the Owens Valley stood in protest, leafletting outside DWP Headquarters in Los Angeles Tuesday as Mayor Garcetti and DWP conducted a re-enactment of the events which took place 100 years before.
Present were members of the Big Pine, Bishop, and Lone Pine Paiute Shoshone Tribes, the Owens Valley Committee (OVC), and several Los Angelenos who proudly stood with us in opposition to their city government.
Explaining that “While We Can’t Change the Past, We want to Create a Better Future,” our leaflet outlined a four point plan for the next 100 years:  Limiting annual pumping to 70,000 acre feet a year, restoring irrigation flow to Owens Valley Ranchers as intended by the Water Agreement, Bringing a third party into Water Agreement Management to break the gridlock, and reducing dependence on water and power from outside Los Angeles.
Our leaflet was well received by 700 attendees of the event, many of whom expressed sadness and concern over their city’s impact on our valley.

We work to provide daily news to all of the Eastern Sierra, in the tradition of Eastern Sierra News Service and the Sierra Wave. We bring you daily happenings, local politics, crime, government dealings and fun stuff. Please contact us.
View all posts by News Staff →
Susan Hicks sentenced to more than 14 years
Snowcreek Athletic Club flooded

I wish nothing but the best for the Owens Valley and give my support for the protesters in L.A.

But what is really needed are expensive lawyers. I wish that some of the millions collected in tax from the residents of Mammoth Lakes could pay the kind of lawyers that could really put the fear of God in LADWP. Protests are a good vent but lawyers working in the background are much more effective.

Good point, Ken. One of the lawyers who beat DWP on Rush Creek and Bishop Cone, Barrett McInerney, pointed out that what the Eastern Sierra needs is a good client with the will to fight. Lawyers will follow.
Benett Kessler

Right. I didn’t think about that. Lawyers work for clients not themselves. And as you suggested, there are not many people with the means or the will to really fight LADWP. That would be really expensive.

It was so great to be with all of you that day. Love the flyer. Kisses to the Owens Valley.

“Explaining that “While We Can’t Change the Past, We want to Create a Better Future,” our leaflet outlined a four point plan for the next 100 years: Limiting annual pumping to 70,000 acre feet a year, restoring irrigation flow to Owens Valley Ranchers as intended by the Water Agreement, Bringing a third party…”

I commend the Owens Valley committee and the Big Pine Paiute Tribe for taking their Owens Valley message to LA. The quote above is an excellent ‘ask’ and gives others a reason to join in your cause.

The recent Arbitration Decision on Blackrock 094 is an important beginning victory for Inyo County in using the Long-term Water Agreement to control pumping. Go to http://www.inyowater.org/mitigation

That’s cryin and dyin way over the top too much fun kind of behavior, Mongo . You are killing me Ignacio. Non stop LOL, they are coming to take me away.

“Mayor Garcetti and DWP conducted a re-enactment of the events which took place 100 years before.”

You mean people were pretending to hang themselves, lose their homes, and go crazy in front of DWP headquarters?

I did a Water Wars re-enactment in my kitchen this morning; I put a straw in a bottle full of water and didn’t stop drinking till it made a loud sloppy sucking noise. When I was done I sprinkled dust in the bottom of the bottle and threw it in recycling out in front of my headquarters so people could see.

Mongo, dumber than a rock, yet not in the same way as others.

I’m sorry I missed it.