By News Staff on May 24, 2018 in General Misc. Stories, Law Enforcement

Paul Louis Harris, 77, was sentenced in Bridgeport on May 22, 2018 to life in prison for the murder of his wife, Betty Lee Harris. Mr. Harris will not be eligible for parole until 2031. 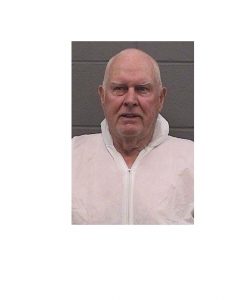 On June 19, 2016 Mono County Sheriff deputies were requested by the sister of Paul Harris to do a welfare check on the Harris’ at their residence in Chalfant, CA. Upon arrival, deputies discovered the body of Mrs. Harris in the bucket of a backhoe owned by Mr. Harris.

Further investigation by the Mono County District Attorney Investigators determined that Mrs. Harris was shot by Mr. Harris the night prior with a .45 caliber handgun from approximately 12-18 inches away.

Mr. Harris then proceeded to drag Mrs. Harris’ body through the house and load
her into his backhoe. He then attempted to dig a hole and bury Mrs. Harris approximately 100 yards off his property on BLM land.

When this failed, due to the rocky ground, Mr. Harris left Mrs. Harris in the bucket and went to bed. The following morning, Mr. Harris cleaned the house and was in the process of washing blood out of the area rugs when Sheriff deputies arrived for
the welfare check.

After the discovery of Mrs. Harris, deputies took him into custody without incident.

Judge Stan Eller concluded the sentencing by emphatically telling Mr. Harris that he was a narcissistic, despicable murderer and that it was his “pleasure” to
sentence him to life in prison.

Mr. Harris will be processed from the Mono County Jail in the coming weeks and will be sent to Deuel Vocational Institute in Tracy, CA for intake into the California Department of Corrections and Rehabilitation. From there, prison officials will determine where to house Mr. Harris to serve his sentence

How could a person SLEEP after shooting their own spouse with a .45 caliber handgun at point blank range ? That’s about as cold-blooded as it gets .