By News Staff on April 30, 2019 in General Misc. Stories, Obituaries 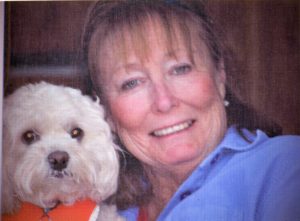 Pattie was born on May 12, 1953 in Detroit, Michigan to John and Dorothy Ellis. Soon after she was born, John moved his children to Garden Grove, California where he met Gena. John and Gena were soon married and raised Cindy, Suzie and Pattie in a loving home.

On October 21, 1970, Pattie was blessed with her only child, Randi. A few years later, Pattie and Randi began their new life in Mammoth Lakes, California and remained there until her passing. She loved her daughter more than anything else in the world and she did everything she could to give her a wonderful childhood. She often volunteered to help with her activities so that Randi could participate. In June of 1991, Pattie met Greg Miller, her partner for life. They got married on June 24, 1999 and were together for nearly 28 years.

Pattie loved her family, friends and her dog Lil’ Buddee. She had a passion for entertaining and cooking. Holidays were always exceptional with ceiling to floor decorations, and a menu to make Julia Childs jealous. She especially enjoyed celebrating Easter, 4th of July, and Thanksgiving and she often invited friends and acquaintances to celebrate the big day with her. She also enjoyed cooking for her “adopted family” at Caltrans and often brought them goodies to make the day go by better. Pattie was an ECV Widder for Bodie and Slim Princess chapters. She would spend months and months preparing her lavish attire and jewels for the annual ball. Pattie was also a diehard Pittsburgh Steelers fan. Football season in her house was always yellow and black!!!!

Pattie loved camping and fishing and being surrounded by family and friends. Grant Lake, Crowley Lake, Benton Hot Springs, Death Valley; it didn’t matter as long as her people were there. She also enjoyed golf, bowling, and games at the lake (especially dominos!) She will be remembered most for her beautiful eyes, infectious smile, attention to detail, and ability to bring life to any gathering.

Pattie was preceded in death by her father and stepmother, John and Gena Ellis, her mother, Dorothy Thompson, and her oldest sister, Cindy Stephenson. She is survived by her husband, Greg Miller, her daughter and son-in-law, Randi and Ron Chegwidden, her sister, Suzie Ellis, her stepdaughter, Lorna Miller, and only grandchildren, Ashley Lee and Willie Lee. A celebration of life will be held at a future date.