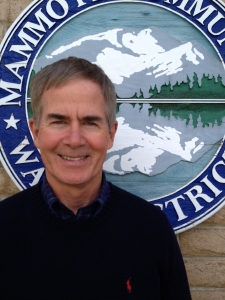 This decision was reached after discussions between the Board and Mr. Hayes, which resulted in a mutual agreement that a change in leadership would be beneficial for the District. This change takes effect immediately.

“The Board is grateful for everything Pat Hayes has done over the past six years for
Mammoth Community Water District”, said Board President Smith. “We believe that Pat’s passion for the District, his steady focus on its mission, and involvement in outside organizations like ACWA and AWWA have established MCWD as a leader in the water and wastewater industry. Pat’s leadership over the past six years has ensured the continued successful operation of the District’s water and wastewater systems in this challenging climate.

“The Board has particular appreciation for Pat’s professionalism and leadership
during the recent drought and activities to protect the community’s water supplies.”

The District’s Maintenance Superintendent, Mark Busby, has been selected as interim
general manager. The Board will actively engage with the leadership team to ensure a
successful transition and the existing high level of service to the community.