Politics and personal beefs continue to see the light of day in Mammoth. 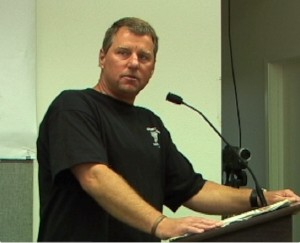 On Wednesday, Mammoth resident Joe Parrino spoke at the Mammoth Town Council to clarify remarks made about him by Police Chief Randy Schienle at the press conference Tuesday.

Wednesday night, Parrino took his turn at the podium to defend himself after the Chief publically accused Parrino of being the source of the rumor that the Chief was having an affair with a married woman. With allegations that the affair took place while Schienle was on duty, Town Manager Rob Clark hired an investigator to look into the allegation. That investigator found that the allegations had no merit.

At the press conference, Schienle emphatically denied that he had an affair with Judy Olson and said that the rumor started when Joe Parrino walked into the office of Eric Olson, Judys husband, and told him of the alleged affair.

At the council meeting, Parrino claimed he did not start the rumor. He told the council that he called Eric Olson when he heard the rumor to ask if it were true. A debate between Parrino and Schienle started to gear up before Mayor Wendy Sugimura stepped in and told Parrino that the council meeting was not the time or place for a debate and if he wanted to talk to Schienle about the matter he should do so elsewhere.

When we called Parrino, he explained that when he called Eric Olson to ask if the rumor were true, Olson told him that a similar rumor had been spread two years before by a woman from Crowley Lake. Parrino says that Olson thanked him for letting him know this rumor was still in circulation.

However the rumor started to circulate, Parrino says that he wasnt going to let the Chief use him as a scapegoat.

We work to provide daily news to all of the Eastern Sierra, in the tradition of Eastern Sierra News Service and the Sierra Wave. We bring you daily happenings, local politics, crime, government dealings and fun stuff. Please contact us.
View all posts by News Staff →
MLTC Budget Slowed By Building Height Dithering
Unemployment Jumps in Mono County