The fate of Mammoth Olympic Academy for Academic Excellence was on the line at the September 22 Mammoth Unified School Board meeting, as the charter's school's contract came up for renewal. School Superintendent Frank Romero had earlier declared that the charter school program must continue to serve students on the Olympic track. Parents remained concerned. 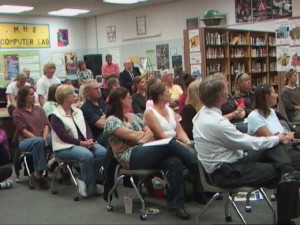 A full house greeted the Board, with parents and students showing up to express their support for this school.

Created in 2004, the charter school was meant to give students who miss numerous days of school a way to stay educated. Competitive ski racers can do the bulk of their school work during the summer so that when winter rolls around they can spend time to train and race.

A large group of speakers easily filled the hour that the Board allotted for the public hearing, and most all spoke in support of keeping the school open. Even those who do not have students at the school, such as local Bonnie Gregory, supported having a choice of education.

"I am a graduate of Mammoth High School and many of my friends who went there with me were successful ski racers," Le Francois said. "I admit that I selfishly want these kids in my class because I think it is a better option for them and for the school. We need to pool our resources together, not divide them, especially with the economy in the shape it's in."

According to Gregory, who had reviewed the budget, the charter school only costs the District somewhere between $150,000-$180,000 each year, including the $30,000 budgeted for the Superintendent, which wouldn't go away even if the charter school was shut down.

Other parents added that if the charter school were shut down, teachers like Le Francois would not receive the students anyway because the parents would home school them rather than send them back to MHS.

A larger piece of the puzzle surfaced after the meeting when one parent of a charter school graduate, who asked not to be named, expressed to Sierra Wave her opinion that the charter school was not the real problem.
"There is enormous pressure on the schools with the high stakes testing that is going on," she said. "School funding is dependent on the scores from these tests, so I can see how skimming the cream of students off the top at Mammoth High School leaves a hole there. If it weren't for the testing no one would care if the charter school remained in existence."

The Board will vote on the charter school renewal at their special meeting on October 13 at 6 p.m.