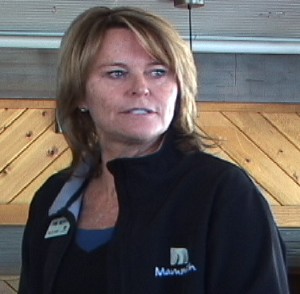 Mammoth Mountain Ski Area executive Pam Murphy shared with employees Tuesday that she is moving on from the company.

“After 40 years with Mammoth Mountain I am moving on to spend more time enjoying life. To say I have loved my time here would be an understatement. I’ve had opportunities most can only dream of, made lifelong friends, and learned countless lessons from my co-workers. I am forever grateful for the opportunities given to me by Dave McCoy and Rusty Gregory and am proud to have worked alongside the best in the industry for so many years,” said Murphy.

Mammoth Mountain CEO Rusty Gregory commented, “As Pam’s close friend of 30 years I couldn’t be more excited for her as she transitions to the next phase of her life and to many new adventures ahead. As Mammoth Mountain’s CEO I hate to see her long career with the company come to an end. Pam’s unique blend of leadership and management skills combined with her years of operating experience have been instrumental in Mammoth’s growth and success. She will be impossible to replace. We love her and we will miss the passion and electricity she brought to the mountain.”

Murphy’s departure marks the end of an era for Mammoth Mountain. Since 1973 Murphy has been a literal force of nature at the California resort. Shortly after taking her first job in the ticket office, she saw a need to prioritize and organize company communication, so she worked with Evan Russell to begin the company’s first marketing and PR department. She quickly rose through the ranks to Vice President of Marketing and Sales and in1998, Mammoth CEO Rusty Gregory tapped Murphy with a new role in operations as General Manager. With that move, she became the first female General Manager for a major ski resort in the country.

Murphy served on Mammoth’s senior management team for nearly twenty years and in her tenure has overseen many divisions including resort operations, retail, rental, ticket sales, ski and snowboard school, events, hospitality, planning, sponsorships and more. Murphy worked closely with the Town of Mammoth, the environmental community and the FAA and was instrumental in bringing air service to the area. She played a key role in planning and developing Mammoth’s world famous terrain parks and youth action marketing, thereby opening new growth opportunities for the resort. She is also credited with bringing large scale events like Women’s World Cup ski races to Mammoth. Additionally, Murphy led major construction projects including the remodel of McCoy Station, Top of the Sierra, and many other resort development projects.

Lee Vining……my all-time FAVORITE spot in Mono County and the Sierras’
……GREAT fishing in the creek,a fun little town to walk in the afternoon-evening….great campgrounds into Lee Vining Canyon…and Bridgeport and Bodie near-by.

if you want to know someone’s true character, look at them through the eyes of their employes. The distinction being if you worked for her or came to her to get complimentary passes. Accusations of nepotism haunted her during her tenure at the mountain. Her intellect, experience, vision and drive… Read more »

What is wrong with being a Lee Vining High School graduate? There are lots of us and lots of success stories, Pam being one of the great ones.

Seems like Pam has been there longer then 40 years. Always smiling and energetic.