By News Staff on April 29, 2012 in Government Agencies/Utilities 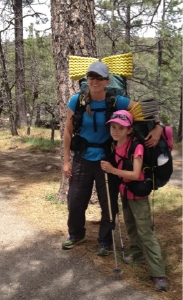 Heather Burror, a Big Pine second grade teacher, and her 8-year-old daughter, Sierra, have started a major trek.  They are hiking the Pacific Crest Trail.  Heather said she and her husband were committed o the outdoors and when Sierra came along, they took her with them.  When Sierra was about 5 years old, Heather said, she decided she wanted to hike the Pacific Crest Trail.  You can track the mother-daughter team at sierrapct.blogspot.com.

We spoke to Heather in February as plans had come together for the big trip.  She said when Sierra was about a year old, she and her husband took their infant daughter with them as they hiked the John Muir Trail. Heather explained, “She saw the pictures when she was 5 or 6 years old and said she wanted to do this herself.”  With father busy on a home remodel job, mother and daughter did go on a hike from Yosemite Valley to Mount Whitney.

This year, Heather asked Big Pine School District for a leave of absence and got it.  Then the reality hit – she would trek over 2600 miles with her 8-year-old.  The two of them headed to the California/ Mexico border on April 22nd and started out.  They have by now put in their first week in the mountains.  They plan to end up in British Columbia in early October.

Heather had told us before the trip that she and Sierra would pick up supplies along the way at post offices or businesses.  Both of them are vegetarians.

We will follow their journey via the blog and so can you.