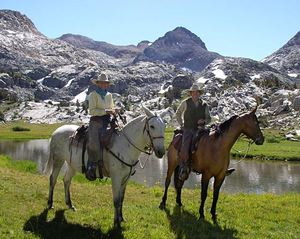 On October 18th, 100 mules and people from Eastern Sierra pack stations will gather at the intake of the Los Angeles Aqueduct to begin a 240-mile march to Los Angeles. The event marks the 100th anniversary of the Los Angeles Department of Water and Power aqueduct. This anniversary is met with some cynicism in the Eastern Sierra where DWP has played a heavy hand on water and land matters. The director of the mule event wants to raise awareness of  LA’s water source.

Lauren Bon of Metabolic Studio in Lone Pine and Los Angeles and an Annenberg Foundation Trustee favors a reconciliation of LA and the Eastern Sierra. She uses public art and happenings to demonstrate her goals. Department of Water and Power invitations to the start of the mule walk on the 18th say it is “an artist action to connect Los Angeles to its water source.” On the other hand, the mule march will benefit local packers.

Jennifer and Lee Roeser of McGee Pack Station were hired by Lauren Bon and Metabolic Studio to perform the 100 Mule March. Ms. Roeser said all of her mules and some from other local pack stations will join in this event along with staff, equipment, purchases and many services from Inyo County. She told the Inyo Supervisors this week that the event amounts to a real economic gain for the Owens Valley.

The mules and people will assemble at the Roeser’s Eight-Mile Ranch on Friday, October 18th, and then move across the highway to the Aqueduct Intake. They will kick off the event around 10:30am and start the journey at noon. For most of the walk, they will follow alongside the aqueduct but also trailer the mules through a section of the Angeles Forest to Newhall. They will then march down to the LA Cascades where Eastern Sierra water flows into the City. That’s November 5th when LADWP will also hold a ceremony at the cascades.

The mules and people will continue through the San Fernando Valley and finally to Glendale where they have been asked to take part in a Vetereans’ Day Parade. They will lay over at the LA Equestrian Center and finally back home on November 13th.

Roeser said she is honored that the Studio and Lauren Bon entrusted this event to her and her husband. Said Roeser, “As a packer you prepare your whole life for something like this. You can put together your skills and assets for a unique event to celebrate a modern, engineering marvel, aside from political feelings in the Valley.” Roeser also said mules are getting overdue notice.

My father, also an LA City employee but in the Bureau of Engineers, always referred to DWP as Dept. of Water and Parasites. Something about DWP and jackasses …. well what can one say 🙂

So your father got a job made possible from other engineers stealing water to support LAs growth? Sweet!

I’ve always wondered where exactly the beginning (intake) of the world’s largest siphon (LA Aqueduct) was located. Is it something you can see on GoogleEarth ?

I don’t know. It’s across from Aberdeen on Goodale Road a couple of miles in.
BK

Seriously Big Rick Obrien? You’re not a local until you’ve been there. You should be ashamed of yourself for putting that in print. 😉

Goes for you to Benett

I HAVE been there, fished there many times…I just didn’t know that THAT was considered to be the intake. It’s the only spot on the Lower Owens that I caught bass instead of trout. Always wondered why there was a concrete dam & all those gate valves.

Mongo The Idiot
Reply to  Mark

I’m not a local, I have never been to the intake; I am ashamed. I have never touched a mule. I haven’t fished since I was 9. I haven’t camped out in 20 years. I am a prisoner of urban servitude, my only escapes; intemperate drinking, emotional excess and natural… Read more »

RandyK
Reply to  Mongo The Idiot

The intake is at the dam retaining Lake Tinemaha. From there it enters a canal that runs to the east of Owens Lake and then under Hwy 14 where it enters Upper Haiwee Reservoir, the regulatory reservoir for the aquaduct. Upstream of Lake Tinemaha, the water flows through the Owens… Read more »

How exactly could the aqueduct go UNDER Highway 14 and enter Upper Haiwee, when the 14 dead-ends near Brady’s gas station in Kern County and the Haiwee is at least 20 miles inside of the INYO County line ? just sayin’.

Been to a few of Metabolic Studios 100 Conversations. Wish I had been to each and every one. Wish I knew more about mules. Wish I could march down to L.A. with them. Bet I’d learn a lot about mules ,miles ,thirst ,hot and cold, sand ,rock and water and… Read more »

Be careful what you wish for Pa, you may get it. Don’t let what you can’t do ANNIHILATE what you can do. I personally wish I had my own mule… You can… Go to the next conversation, Learn something about mules today on the internet, March a bit of the… Read more »

We tend to forget that the problems with water we have here are happening worldwide. The misuse and polluting of water may be the biggest threat to us globally. The things we all need most, (air, water, food) are all tied together. Oceans create most of the oxygen on the… Read more »

I love Mules :-), can you imagine a sweeter set of ears outside of a corn field? …and I hope at least one mule carries a green garden hose to symbolize the 30+ gallons of water the typical LA square foot of lawn uses per year. Or how about a… Read more »

I’m sure the yard cars and discarded home appliances use no water, but even high desert flora requires a quantity of water to survive.

My desert flora doesn’t need more than rain. I only need the aqueduct to wash my yard cars and sweep my driveway.

As far as I am concerned, L.A. DWP can have all the mules, water and crap they want. Just stay down there.