The Owens Valley Committee has been working for over thirty years to protect our valley. OVC has legal standing, along with six other parties, for oversight of the Lower Owens River Project (LORP). 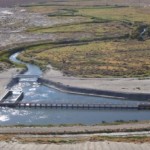 The LORP is mitigation for the seeps, springs, plants and animals destroyed or harmed when LADWP put in a second aqueduct and pumped ground water to fill it. As part of the LORP, LADWP should “adaptively manage” to meet the goal of a healthy river.

For the past few years, the LORP consultants that study the river have suggested an experiment to change the water flows of the river and in doing so hope that oxygen levels will improve.

The Los Angeles Department of Water & Power should be doing “adaptive management” as recommended by these consultants. However, LADWP has refused to proceed with this adaptive management recommendation unless the amount that they are permitted to pump out of the river at the pumpback station is increased from the mandated 50 cubic feet per second (cfs) to 75 cfs and the required lower limit of 40 cfs is decreased to 25 cfs.

The Owens Valley Committee is concerned with the health of the entire Owens Valley. We want to prevent the LORP from being a method for the LADWP to export more water from our valley.

Although we believe the LORP is still in its youth, and it remains to be seen how it will naturally evolve, the OVC Board of Directors voted to submit conditions that, if accepted by the other MOU parties, would allow us to consider flow revisions.

These were the conditions we submitted to the other MOU parties:

1. Cap the amount that the pumpback station can discharge per water year into the aqueduct at the average amount of the last 6 years (30,700 acre feet per year).

2. Include a statement that the modifications to the LORP flow regime will not result in increased export of water from the Owens Valley.

3. If DWP seeks to drill new wells and/or drills new wells on the east side of the aqueduct or north of Owens Lake, the agreement terminates automatically.

4. DWP and the Inyo County Water Department must apply for grants to do a feasibility study on the conveyance issues in the LORP and improving the Alabama Gates outlet.

5. Results of the experiment must be reviewed annually by the MOU parties and complete water quality data and any other data must be provided at the time of the annual review.

6. If after the first year, water quality has declined significantly, this experiment will be called off and the flow regimes will resume according to the Stipulation and Order. Other aspects of the agreement, however, will continue, including the feasibility study of conveyance issues in the LORP.

7. Augmentation of the flow at points below the intake will be utilized in order to increase O2 concentration.

8. Language must be included that defines the conditions that would prevent the experiment being conducted for the second year such as the volume of water able to be retained inTinnemaha Reservoir, or amount of flow in the Owens River above the intake.

Thanks OVC for standing up for the whole valley. Since LADWP won’t abide by the LTWA don’t trust them to abide to any agreement made for the LORP.

It sounds like it is time for the MOU Party Rep’s and their Attorneys to meet, rock and roll and craft an agreement, get the approval of their respective MOU Bodies and seek approval of the Court. Beginning water quality monitoring asap to create a baseline.would be one idea that… Read more »