The Owens River Water Trail took one step closer to reality with the completion of the environmental documents late last month. Monday evening, the Inyo County Water Commission held a public hearing to go over the findings of the Environmental Impact Report. 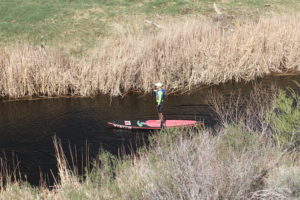 Bottom line: overall, the EIR was good news. There were some mitigatable impacts as well as the positive impact to water quality.

The concept of a river navigable by kayaks and canoes was part of the County’s recreation plan for the re-watered Owens more than 10 years ago. Inyo Water Department Mitigation Manager Larry Freilich pursued California River Parkways Grant funding through the state Department of Natural Resources to clear a 6.3 mile stretch from Narrow Gauge Road just north of Lone Pine to the pumpback station. The project description included put in and take out facilities to provide access for people with physical limitations.

As with all things water, there were complications. Los Angeles Department of Water and Power wanted an environmental study prior to signing off on a site agreement. The grant funding couldn’t pay for both an EIR and the project; LADWP offered to pick up the tab for the EIR.

So that brings us to Monday. 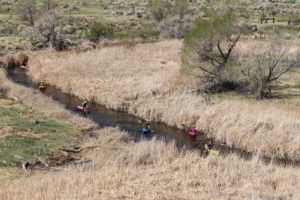 Jennifer Jacobus with Environmental Science Associates went over the details of the EIR. Amphibious diggers, with low pressure tires to reduce impacts, would remove the tules that have choked off the waterway. The narrow stretches of the Owens will be widened to 10-feet. The debris will be spread in designated areas. An alternative requiring less time and money would simply have the debris deposited as the equipment pulls it out of the river.

The documents conclusion: any impacts would be considered less than significant with mitigation. Issues of fish stress and nesting birds would be avoided with an October to May work period.

In response to a question on maintaining the open channel, Freilich explained initially some maintenance would be required twice a year, eventually down to once a year and finally once every five years.

Most of the concerns during the public comment period focused on abuse by those using the river trail. The answers were monitoring and information kiosks. Freilich said the project was never considered a “destination,” rather something else to do for visitors to the Eastern Sierra.

“There’s no way to protect the land once you let people in,” said Kathy Bancroft, Tribal historic preservation officer for the Lone Pine Paiute-Shoshone Reservation. Bancroft has seen the degradation of the Alabama Hills and worries the same will happen to another area rich in Tribal history. She also said the Tribe’s concerns weren’t reflected in the EIR nor was the Tribe contacted during the cultural survey segment of the EIR.

The full document is on the Inyo County Water Department website. The public comment period ends June 25. Those comments can be sent to Larry Freilich at [email protected] county.us or by mail, P.O. Box 337, Independence, CA 93526.