A caravan of scientists, staffers and water watchers wound its way through the maze of roads on Owens Lake last week in search of answers: Are the dust control measures working and will this project ever be done?

The answers are yes and probably not, respectively. 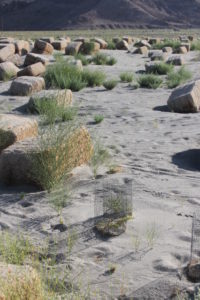 The scientists were part of the Owens Lake Scientific Advisory Panel, a branch of the National Academies of Science, Engineering and Medicine, established through the stipulated order in the legal settlement between Great Basin Unified Air Pollution Control District and the Los Angeles Department of Water and Power.

The initial dust control was shallow flooding. Over time, less water and more innovation was used to keep PM10 emissions under control. While the Owens will likely never be a lake again, it’s now supports bird habitat, walking trails, an art piece on the north end and serves as a laboratory for dust control measures.

Great Basin’s senior scientist Grace Holder went through the efforts to keep dust from roiling off the dunes north of Keeler, an eight-acre, off-lake site. Native shrubs, watered by hand from spring through fall, were interspersed with weed-free straw bales, each placed broadside to the wind. 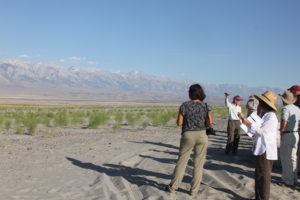 The tour served as an inventory of control measures and condition monitoring areas, including acreage dotted with a sprinkler system and monitors to evaluate soil moisture and salinity.

When the control measures started 15 years ago, there were three monitoring sites to capture emissions, one each in Keeler, Olancha and Lone Pine. The information was gathered at each site manually. Now there are 10 sites with instant feedback to staff cell phones. Once there were approximately 40 incidents of heavy emissions, now those incidents are down to three or less each year. So far in 2019, there has only been one incident. 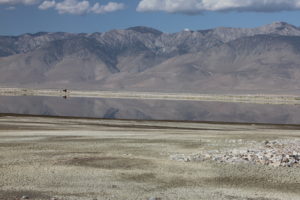 The goal was dust control over a nearly 49 square mile area. Now there are only 1.2 square miles to go. The efforts focus on transitioning areas to control measures that require less water and greater efficiency. Great Basin’s Control Officer Phill Kiddoo described the effort as a study in progress, a learning experience.

The Advisory Panel will continue watching that progress until April of next year.

Your over charging for your 2 cents worth. The difference between today and pre dust control Owen’s lake is night and day. Night and day I tell ya. No more brown outs in L.P. very little dust blowing off the lake these days. Sounds like fake news to me 2… Read more »

Microscope my arse. Keeler well water has been used for 5 years now to keep those plants alive. Drought will probably kill off most of what has been planted. Sands have increased all around the plant test area, bare ground and shifting sands still remain. As far as particulate matter,… Read more »