By News Staff on May 12, 2016 in Entertainment/Local Events/Activities, General Misc. Stories, Public Event

Matt Kingsley put the Owens Lake Trails into perspective at the official opening of the 4-mile system complete with art installations. Inyo County’s Fifth District Supervisor admitted he was initially skeptical of the public access element of the dust mitigation project. 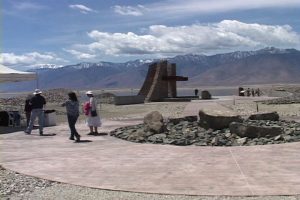 Part of Kingsley’s “this” was the Plaza Trailhead, site of the ribbon cutting – a half-mile stroll through what scientists would call dust mitigation but those who took the walk would call grass land surrounding shallow ponds reflecting the Sierra Nevada, ending at the Plover Wing Plaza surrounded by rock nests, seating, shade and information kiosks. 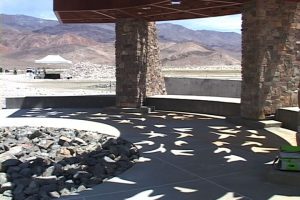 Dust mitigation has been in the works for the past 20 years and the lake has morphed from a brutal construction zone to a mesmerizing, quiet habitat and humanity sanctuary.

The public access/recreational element was part of the Los Angeles Department of Water and Power’s mandate. But during the opening ceremonies at the Visitors’ Center south of Lone Pine and the Plaza ribbon cutting, politics were set aside.

Richard Harasick, LADWP’s director of water operations, started the formal part of the program. Harasick worked on the mitigation project for eight years, starting in 1998, then returned a couple of years to the realization that the dust control project had “accidently” turned into a bird sanctuary. He later admitted LADWP “came to the table kicking and screaming, but once we were there, we came in style.” 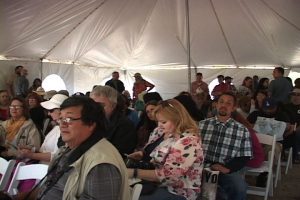 Phill Kiddoo’s perspective was on the dust not blowing off Owens Lake. As the “badge” for the Great Basin Unified Air Pollution Control District, Kiddoo had all the numbers: 46.8 square miles of dust control within the 110 square miles of former lake bed, 75,000 tons of PM10 pollution once howling off the lake in any given year making Owens the largest polluter in the world. To date, emissions have been reduced by 96-percent with 100-percent attained by 2017.

A task nearly as tough as controlling dust was softening the straight lines and sharp angles of the 100 miles of roads and acres of tilled soil designer Perry Cardoza found on the lake. Cardoza’s of Nuvis Landscape Architecture answer and inspiration was the angle of the Snowy Plover’s wing, replicated in the stone columns at the Plaza trailhead. 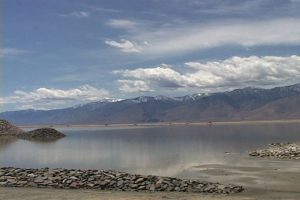 A photograph of plover’s in flight was turned into cutouts in the patinaed steel overhang that form shadows in reverse on the ground below. The flatness of the playa is broken up by 14 “waves” of gravel that are both highly photogenic and help deflect the winds.

Once everyone was shuttled to the Plaza, Kathy Bancroft, tribal historic preservation officer for the Lone Pine Paiute-Shoshone Reservation, blessed what she identified as “a sacred place.”

The ribbon, like the project itself, proved tough to cut, but LAWPD and Inyo residents got the job officially done.

“To date, emissions have been cut by 96% with 100 % by next year” . It’s been a long haul, but I am truly impressed. And to become a riparian sanctuary to boot , makes it all that much better . There it is, take it.