Politics were left behind at Wednesday afternoon’s tour of the Owens Lake dust mitigation project as air pollution district board members and staff joined Los Angeles staff and interested parties to get a first-hand look at the 110-square miles of controversy. 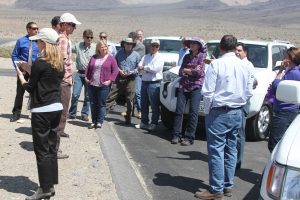 Phill Kiddoo gave an overview of the project

The tour was celebratory, showing off dust control methods that were once tests and are now codified in the just-approved State Implementation Plan. Alternatives to water-consuming shallow flooding to control the nation’s worst PM10 emitter were introduced 17 months ago with an agreement between the Los Angeles Department of Water and Power and the Great Basin Unified Air Pollution Control District. 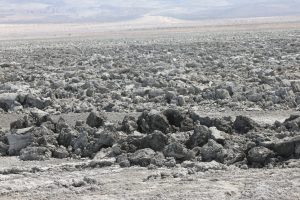 The lake is a work in progress, a huge canvas of shifting colors accented with red-cheeked avocets, little grebes and egrets. It’s the massive workplace for a whole community of workers.

Richard Harasick, LADWP’s director of water operations, spoke of the spirit of cooperation between the city and the district at Monday morning’s meeting. That spirit may not have been too obvious at the meeting but it was during the tour as Ted Schade, former district air pollution control officer and the target of LADWP lawsuits, joked with Milad Taghavi, the department’s Owens Lake policy and planning manager, or the Emperor of Owens Lake, according to Schade. 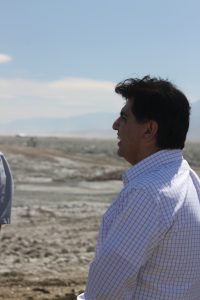 The tour started with an overview with Phill Kiddoo, district air pollution control officer, explaining the idea of dynamic water management introduced in the first SIP. “Nobody knew what that meant,” he said. The initial plan encouraged DWM in “non-emissive years.”

But, Kiddoo said there were never non-emissive years so they approached the idea by looking at non-emissive areas. That approach led to a variance last spring, allowing LADWP to save water by taking water off more than seven square miles last spring, the end of the lake’s dust season.

The tour moved to get a look at tracts recently tilled into rows running perpendicular to the north-south wind patterns. The furrows expose heavier soils to the winds. Currently, 3.1 square miles of the lake bed are tilled with shallow flooding as the back-up. 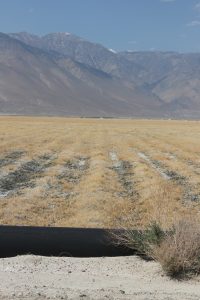 Taghavi explained the tracts will have to be re-tilled as they wear down. The tracts will be leveled, wet down with sprinklers and re-tilled, much like farmers allow their fields to go fallow for a period of time. When asked about the time limit to get water on an emissive area, Taghavi explained that the tracts may be subdivided to make the re-wetting easier. “We’re doing fire-drills now,” he said.

One of the oldest methods used to control dust was vegetation, initially salt grasses, but now the department is looking at more diversity in plant species, recommended by the Native Plant Society. While the fields were well covered, the grasses were clumps of brown. Schade explained that after the first year of planting, the grasses turn brown; in the second year, they go to gray but new green shoots come back. 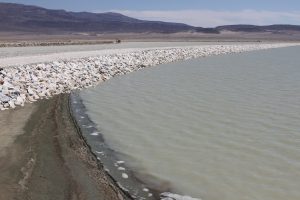 True to their name, the salt grasses require brackish water to grow. The department infuses irrigation water with saline solution that runs in pipes to each field.

The shallow-flooded ponds provide what Taghavi described as a brine-fly buffet for migratory birds. The Owens Lake is returning to its status as a stop-over for birds moving back and forth from South America to as far north as the Arctic in the spring and fall. 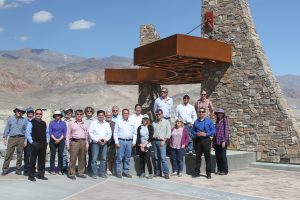 The final stop was the Owens Lake Trail center, scheduled for its grand opening in two weeks.