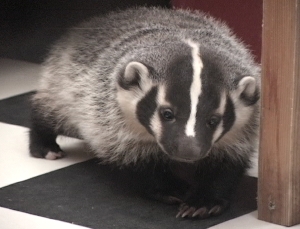 In an accident near Independence, a family of badgers, all except for one young animal, was killed on the highway. Eastern Sierra Wildlife Care took in the little orphan and will try to save it.

It’s mother and siblings were not so fortunate. This young juvenile was not injured and yet was traumatized by the devastating accident. The person who found the young badger said it was lying up against its mother, killed by a vehicle. Once at the Widllife Care Center, an exam and visual scan revealed an upset young Badger with no injuries .

Later left to wander around the exam room to observe any injuries such as limping or loss of balance, the Badger appeared in fine shape. Once in a bigger cage and taken to a safe outside pen, the badger adjusted to her new surroundings, ate a meal and took a long nap.

Eastern Sierra Wildlife Care center is now searching other centers to find another orphan badger in the network, which is rare. We’ll keep you informed on the developments of this story.

We work to provide daily news to all of the Eastern Sierra, in the tradition of Eastern Sierra News Service and the Sierra Wave. We bring you daily happenings, local politics, crime, government dealings and fun stuff. Please contact us.
View all posts by News Staff →
Sgt. Eric Hugelman – back on the job
Big Pine fire victims receive volumes of help