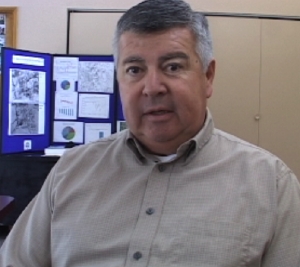 Big Pine Tribal Administrator Gary Bacock continues to voice concern over what he and others see as a closed process over water issues.

While Inyo County takes its own citizens to court over an openness of government issue, members of the Big Pine Tribe have their own deep concerns about exclusion of the public from the government process related to water issues.

Gary Bacock, Big Pine Tribal Administrator, sent Inyo County another letter that lays out what the tribe sees as continued violations of the Brown Act that governs the openness of public meetings. Bacock’s letter takes Inyo County to task over a lack of input into the Department of Water and Power pumping plan and the County’s move to dispute that plan.  The Big Pine Tribe wanted their pumping around Big PIne to be included under the dispute.  Bacock points out that citizens never had a chance to weigh in on the final items for dispute.

Bacock says the Supervisors had no right to talk about the pumping dispute in closed session since it’s not litigation.  Bacock’s letter says, “Dispute resolution is not anticipated litigation and no litigation can occur until the County exhausts their administrative remedies” with DWP.  He objects to dispute items under discussion in closed sessions.  Bacock also accuses both Inyo and DWP of violating the Brown Act when they did not allow the public to speak for two public meetings in a row of the Technical Group.

Inyo County Counsel Randy Keller justified discussion of the pumping dispute in closed session.  He said that the ultimate destination of the issue could be court, so each step has to be considered a legal issue. Keller did say that the public “has a right to come to the Board and offer a position.”  Keller added that the pumping issue did come up for public discussion at a Water Commission meeting and Board meeting.  Keller did say he suspects the County will respond to Mr. Bacock.

@upthecreek- In order to maintain the solvency of your “Profane” pension plan, all mtngs held by the Elite will now be closed to the Sheeple. Makes as much sense as the rest of your posts.

Quiet a lot of discussion regarding “closed Sessions” at the Supervisors meetings…..this is more proof of the good ole “‘cowboys” of Inyo County believing that they are in charge of their own “fiefdom.” It’s interesting how the Supervisors do almost the exact opposite of what the constiuency wants.

The masses of people called the “Profane” by the Elite are the greatest enemy to their plans. Thus, it is crucial to keep the nature of the agenda hidden

soon all the meetings will be Closed Sessions.
perfect for an Out of Control Government,

they must be taking lessons from Mammoth.