A Quanset hut reveals the military origins of the research station, but now the site is used to study alpine environments, geology, and astrophysics.

One of the lectures on Sunday was on the social behavior of marmots.

Associate Director of the White Mountain Research Station, John Smiley, gave a presentation on the new solar power system set up at Barcroft. With a $15,000 annual power bill and years of constant repairs to the wires that bring electricity to the high altitude station, the researchers have gone solar. 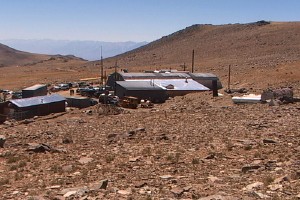 Amorphous silicon solar panels, draped over the curved roof are expected to provide the power needed to run the station. With extreme conditions in the winter and astronomy experiments that need constant electricity, Smiley explained that they do have a back-up generator just in case. Part of the draw on the Barcroft open house day is that the gate across the road is unlocked. That means that if you hike to the top of White Mountain Peak, you knock four miles off the round trip.

Roughly 100 people, many of whom were Eastern Sierra locals, took advantage of the open house to hike to the 14,242 foot summit. Some of the hikers had the pleasure of running into two bighorn sheep, one of which was very young, grazing the rocky slopes a few hundred feet from the summit.

With the exception of the late mountaineers who got a crack of noon start, most of the hikers who made it to the top ran into a med student studying altitude sickness.

The high altitude site is a good place to study the effects of altitude on people. The student from UC Santa Barbara positioned himself on the summit of White Mountain to measure blood oxygen levels of many of the people who hiked to the top of the peak that day. The hope was to be able to clarify the factors that lead to Altitude Sickness.

The med student said that he planned to continue the altitude sickness study on Open Gate Day, September 3rd. Thats the second of two days a year the road to Barcroft is open to the public. Its a good day for hiking to the top of White Mountain, but there wont be any guided tours or research presentations.

For more information on the White Mountain Research Center or their ongoing lecture series, go to www.wmrs.edu.

We work to provide daily news to all of the Eastern Sierra, in the tradition of Eastern Sierra News Service and the Sierra Wave. We bring you daily happenings, local politics, crime, government dealings and fun stuff. Please contact us.
View all posts by News Staff →
Three Women Jailed on Stolen Credit Card Charges
Stolen Bike Found in Mammoth