Inyo County—a county of 10,000 square miles that contains Death Valley and three monumental mountain ranges—is both the second-largest county by area and the least populated by density in California. That is why high-speed Internet access was crucial to civic engagement in the November 2016 election. 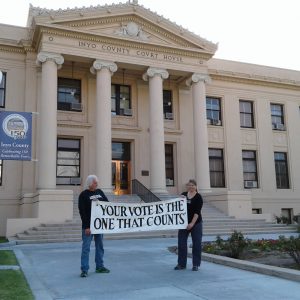 Since 2014, the Inyo County Elections department has worked on several projects to enhance accessibility of public information. We have collaborated on a grant-funded project with ELECTricity to create a new mobile friendly website (http://elections.inyocounty.us/) at no cost to Inyo County citizens.

And we have added numerous no- or low-cost features to this website, including the ability for voters to verify that they are registered to vote in Inyo County, a tool to look up their polling place and see what’s on their ballot using their address, confirm that their mailed ballot was received and an interactive way to find out who their elected representatives are.

The fact is rural communities can face significant barriers to civic participation. Without easy access to online information, less people can connect to their government. Fortunately, that is not the case in Inyo County.

In the weeks leading up to the November 8 Presidential Election, the Inyo County election website received over 7,000 individual visits, including 2,641 on Election Day. That may not seem like a lot, but Inyo County has only 10,000 registered voters. This means that over half of them likely used our online services during this election.

Making voting information available online is one part of the equation, but voters also need to have a reliable way to access it.

Inyo has been wired for the last two years because of the Digital 395 project—so named because it runs along Highway 395—a 583-mile fiber optic network built from Barstow, CA to Carson City, NV. According to the California Public Utilities Commission, Digital 395 is slated to connect 28,127 households.

Digital 395 would not have been possible if the state hadn’t come up with a public-private mechanism in 2007 to pay for the broadband infrastructure that now runs through our county. That mechanism is the California Advanced Services Fund (CASF).

The CASF was established to affordably support the deployment of broadband to unserved and underserved areas of California. To date CASF has funded 57 projects and reached 300,000 households, but the California Public Utilities Commission program will be out of funds after it approves 14 pending projects. There are, however, many more than 14 broadband projects in California in need of funding.

To help meet this need, a network of civic organizations and legislators has launched an effort entitled “The Internet For All Now Act” to expand the adoption of broadband in California. If successful, this effort could help Inyo County’s most remote communities to be online and able to participate in our digital democracy.

Technology has the power to connect us to each other, to our government, and to important civic information. But if it isn’t accessible by everyone, it can actually widen our democracy’s existing digital divide.

As more civic and government resources are being put online, it will be even more important that people have reliable broadband through their devices and in their households.

We must not forget that the rural broadband buildout of today is equivalent—in both cost and socioeconomic necessity—to the rural electrification works of the 1930s. Just imagine what would have happened in Depression-era California if farmers had not gotten electricity. The benefits of broadband are no different.

I have seen the before and after of the digital divide. When I became Inyo County’s Clerk-Recorder & Registrar of Voters in 2010, we had a limited online presence, which meant that citizens had access to our office only during business hours for most services. Six years later, we have a robust online platform that engages a network of thousands of people and allows Inyo County to better function as an inclusive democracy.

There is just no doubt that the time is now to ensure broadband infrastructure in all of California. So please consider supporting the Internet For All Now Act to engage all California citizens in the fruits of digital democracy.

Andy, You are comparing apples to oranges. The 1.54 Mbs T-1 lines to which you refer were old technology on Verizon’s old copper wired plant. This had nothing to do with the fiber optic plant I was talking about. FYI – In the early ’90’s Verizon (then Contel) built a… Read more »

You obviously have a long history with this issue on the Eastside. And yes, you do sound a tad bitter. That aside, your contention that “By 2000 we had a vision of the future and it was grand! Cable providers and the Telecos racing each other to bring the best… Read more »

Roy, I believe you are grossly misinformed. Prior to Digital395 my employer was paying close to $5K per month from Verizon for a couple of T1s. That’s less than 5 Mbits/s – about half of what many homes in metro areas get for ~$75/month. Furthermore, Verizon had little or no… Read more »

Digital 395 is a benefit? I don’t think so. The Eastern Sierra took a GIANT step backward when the government took over the internet backbone with the digital 395 project. We were going to build our TV Network operations center in the area but, instead, built it outside the area… Read more »