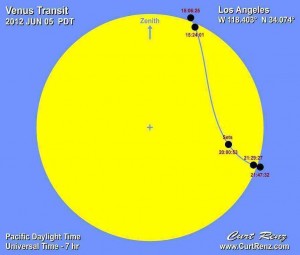 Many things are called “once-in-a-lifetime” experiences, but on June 5, Venus will be at the center of an astrological event that won’t happen again for another 105 years. So it’s safe to say that people alive right now will only get one chance to see Venus move across the face of the sun on Tuesday, June 5.

Venus will be truly the star of the show at the Eastern California Museum, where interested star gazers can use the Museum’s large telescope and sun filter to safely view the transit, starting around 3 p.m. and going until at least 6 p.m., on Tuesday, June 5. (Like an eclipse, looking directly at the sun to try and see Venus can cause serious eye damage.) Local astronomer April Zrelak will be operating the large telescope (11 inches in diameter), and providing commentary and handouts about the rare event.

The Venus transit has only been observed six times in the modern, telescope era. Those early transits transfixed astronomers, after they figured out they were happening. Johannes Kepler, a pioneering German astronomer, predicted the transit in 1631, but died before he could observe it. Only two scientists observed the 1639 transit. Finally, in 1761, the astronomical community got dialed in with telescopes and documented the Venus transit.

Another unusual aspect of the Venus transit is that it occurs in pairs, eight years apart. So the last transit was in 2004. But the next time Venus will trek across the face of the sun will be 2117. So when it comes to a Venus transit, it’s probably not a good bet to try and “catch it the next time around.”

The public is invited to come to the Museum Tuesday, June 5 for the evening of Venus viewing, any time from 3 p.m. to at least 6 p.m., which is when the viewing will be the best. The Eastern California Museum is located at 155 N. Grant St. in Independence, three blocks west of the historic courthouse. For more information, call 760-878-0258.

We work to provide daily news to all of the Eastern Sierra, in the tradition of Eastern Sierra News Service and the Sierra Wave. We bring you daily happenings, local politics, crime, government dealings and fun stuff. Please contact us.
View all posts by News Staff →
End of an era: Kenney Lee Scruggs
LADWP suits against Mammoth water: a new judge, letters of support and mailers