In the cold light of an early winter morning, Lauren left her car at the closure on (168) and hiked in to the turnoff for North Lake. She was soon jogging the narrow path southward along Bishop Creek. Leafless shrubs and driftwood crowded the creek’s banks. Something moving amid the debris caught her attention. About 4 feet above the moving water, a bright blue object was dangling. On closer inspection, she saw it was a Belted Kingfisher with a fishhook caught in the flesh under her beak. The fishing line wrapped around her beak was caught on a crooked branch. 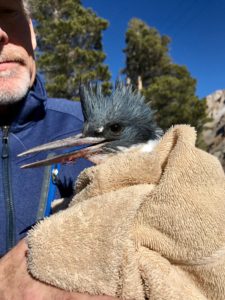 Once she could reach cell service, Lauren got in touch with Wildcare Eastern Sierra. Center staff contacted Rescue and Return volunteer Kevin Calder and he was soon on his way to help the suffering bird.

On arrival, Lauren met Kevin and led him to where the struggling bird was hanging. Kevin worked his way through heavy thickets toward the trapped bird, stepping carefully from rock to rock. Once in reach of the Kingfisher, he wrapped her gently in a small towel and lifted, taking her weight off the line. Kevin was then able to cut the filament and carry her back to solid ground where he placed the Kingfisher in a warmly-padded carrier. Taking turns carrying the box, Lauren and Kevin hiked back to their cars.

Upon arrival at the Center, the staff removed the hook and line and the female Belted Kingfisher was carefully examined. The bird was dehydrated and stressed, but otherwise in surprisingly good condition. Most likely, she hadn’t been entangled for long. She would have died soon if the one-chance-in-a-million discovery by Lauren hadn’t saved her life.

She was given fluids and pain medication; a few days of food and rest and she was ready to go back. Mid-morning on a sunny windless day, Kevin and Lauren brought the Kingfisher back to the creek edge not far from where she had hung. She moved restlessly in the small carrier; the cool air and the sound of rushing water told her she was home. As the cage door was opening, Kevin caught a glimpse of a fast-moving bird speed past them. The female Kingfisher blasted out and, “like a rocket,” followed the passing bird downstream where they disappeared from sight. “I’m not absolutely positive, but I think it was her mate,” Kevin concluded.

A few years ago was on a fishing trip at Lee Vining Creek and saw a Bluebird with a fish hook and line trapped upside down in a tree over the creek..at first,thought he was dead..couldn’t reach to save,but I,among others trying were able to find a long tree branch… Read more »

What a great story. Many thanks to Kevin, Lauren, and Wildcare Eastern Sierra for their work to save this beautiful bird. Thanks, Sierra Wave, for sharing the story! Come on, fisherman, don’t leave your fishing line behind where birds and wildlife can be killed by it.