SACRAMENTO, July 8, 2013— The U.S. Forest Service and other land management agencies have a new fire safety campaign in California. The One Less Spark, One Less Wildfire campaign is designed to provide constant reminders during this fire season to reduce the numbers of human-caused vehicle and equipment wildfires throughout the state. 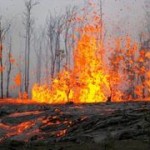 Fire season in California has technically just begun, and already campfires have been blamed for 45 fires on national forest land. Thirteen fires have been sparked by equipment such as string trimmers, chain saws and mowers. An abandoned campfire started the 1,708 acre Carstens Fire on the Sierra National Forest near Yosemite, costing millions of dollars.

Human-caused fires are avoidable. For more information about fire prevention, go to www.fire.ca.gov