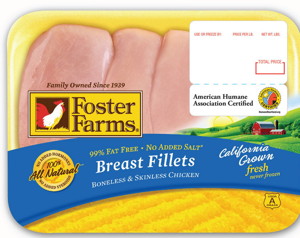 The US Department of Agriculture (USDA) has told Foster Farms that it will block operations at facilities in California that have been implicated in a multistate Salmonella Heidelberg outbreak unless the company quickly outlines its plans for making the product safer, according to an Oct 7 letter from the USDA’s Food Safety and Inspection Service (FSIS).

The FSIS asked for a reply from Foster Farms within 3 business days. The FSIS threatened to pull inspectors from the plants, which would prevent the company from selling chicken processed there.

So far 278 cases of salmonellosis have been reported in the outbreak, 213 of them in California, the Centers for Disease Control and Prevention (CDC) said on Oct 8. Most of the 17 affected states are in the West.

The FSIS said that it and the CDC have been investigating the outbreak, which began in March. The agency said that intensified Salmonella testing over a 3-week period in September found a high frequency of positive tests for one of more of the outbreak strains, especially at the company’s plant in Fresno, Calif., one of three that have been associated with the illnesses.

Positive tests for the outbreak strain in the products and the illnesses suggest that sanitary conditions at the plant pose an ongoing serious public health threat, the FSIS said. The letter acknowledged that safety improvements at the company’s facility in Kelso, Wash., resulted in fewer microbiologic findings and illnesses.

The letter also aired concerns about multiple inspector reports from earlier this year of fecal material on chicken carcasses.

Foster Farm president Ron Foster, in a letter posted yesterday on the company’s Web site, said the company is taking all possible steps to ensure the safety of its products and that the FSIS letter applies to its plants in Livingston and Fresno. He said Foster Farms is dedicated to addressing the USDA’s concerns and has implemented new safety measures at the two facilities.

In other developments, Kroger, a grocery chain based in Cincinnati, said it was pulling products processed by the three affected Foster Farms facilities from its Fred Meyer, Fry’s, King Soopers/City Market, Ralphs, Food 4 Less (West Coast), Smith’s in southern Nevada and New Mexico, and QFC stores and warehouses. It also said it is notifying customers who bought the products, based on a register receipt system.

Note: Costco and Von’s have not pulled the products as of this morning, and they are for sale locally.

The U.S. Department of Agriculture’s (USDA) Food Safety and Inspection Service (FSIS) has issued a public health alert due to concerns that illness caused by strains of a bacteria known as salmonella are associated with raw chicken products produced by Foster Farms at three facilities in California. The products were mainly distributed to retail outlets in California, Oregon, and Washington State. Raw products in question bear one of the establishment numbers inside a USDA mark of inspection or elsewhere on the package:

As of October 7th, a total of 278 persons infected with seven outbreak strains of Salmonella Heidelberg have been reported from 17 states. 42% of ill persons have been hospitalized, which is about twice the expected number with salmonella infections.  The outbreak strains are resistant to several commonly prescribed antibiotics. This antibiotic resistance may be associated with an increased risk of hospitalization or possible treatment failure in infected individuals. No deaths have been reported thus far. 77% of ill persons have been reported from California, as shown on the following page.

The outbreak is continuing, and Foster Farms is collaborating with federal and state scientists in the investigation. USDA personnel have continued to work during the federal government shutdown, and 7-8 CDC employees have been called back in to help monitor the situation. Additional actions may be taken based on any new evidence that is discovered.

If you think you may have become ill:

Most persons infected with Salmonella bacteria develop diarrhea, fever, and abdominal cramps 12 to 72 hours after infection. The illness usually lasts 4 to 7 days, and most persons recover without treatment. However, in some persons, the diarrhea may be so severe that the patient needs to be hospitalized. Salmonella infection may spread from the intestines to the bloodstream and then to other body sites and can cause death unless the person is treated promptly with antibiotics. Children younger than 5 years, older adults, and people with weakened immune systems are more likely to have a severe illness from Salmonella infection. Contact your healthcare provider if you think you may have become ill from eating contaminated food.

While it is not unusual for raw poultry from any producer to have Salmonella bacteria, it is uncommon to have multidrug-resistant Salmonella bacteria. Salmonella is known to contaminate poultry flocks in the USA. It is naturally occurring in poultry and can be fully eradicated if raw product is properly handled and fully cooked. Several European countries have succeeded in eradicating it in their flocks through stringent controls, but those controls are considered too costly to implement in the USA.

CDC and USDA-FSIS recommend consumers and retailers follow these food safety tips to prevent Salmonella infection from raw poultry produced by Foster Farms or any other brand:

Wash hands with warm soapy water for 20 seconds before and after handling raw meat, poultry or seafood.

Wash utensils, cutting boards, dishes, and countertops with hot soapy water after preparing each food item and before you go on to prepare the next item.

Food contact surfaces may be sanitized with a freshly made solution of 1 tablespoon of unscented, liquid chlorine bleach in 1 gallon of water.

Separate raw meat, poultry, and seafood from other foods in your grocery shopping cart and in your refrigerator.

If possible, use one cutting board for fresh produce and a separate one for raw meat, poultry, and seafood.

Cook poultry to a safe minimum internal temperature of 165°F as measured with a food thermometer.

Retailers should hold cooked poultry to a safe minimum internal temperature of 165°F or higher as measured with a food thermometer.

Chill food promptly and properly. Refrigerate or freeze perishables, prepared foods, and leftovers within 2 hours (or 1 hour if temperatures are above 90°F).

Note: While cooking instructions may give a specific number of minutes of cooking for each side of the product in order to attain 165 degrees F internal temperature, consumers should be aware that actual time may vary depending on the cooking method (broiling, frying, or grilling), the altitude, and the temperature of the product (chilled versus frozen). It is important that the final temperature of 165 degrees F be reached for safety. Please do not rely on the cooking time for each side of the product, but use a food thermometer, which is the only way to know that food has reached a high enough temperature to destroy foodborne bacteria.

Consumers with food safety questions can “Ask Karen,” the FSIS virtual representative available 24 hours a day at  HYPERLINK “http://askkaren.gov” \t “_blank” AskKaren.gov. The toll-free USDA Meat and Poultry Hotline 1-888-MPHotline (1-888-674-6854) is available in English and Spanish and can be reached from l0 a.m. to 4 p.m. (Eastern Time) Monday through Friday. Recorded food safety messages are available 24 hours a day.

It is likely that more specific information on this fairly large outbreak will be delayed due to the current political stalemate in Washington, which has affected, and will continue to affect, surveillance of outbreaks of disease.

We work to provide daily news to all of the Eastern Sierra, in the tradition of Eastern Sierra News Service and the Sierra Wave. We bring you daily happenings, local politics, crime, government dealings and fun stuff. Please contact us.
View all posts by News Staff →
Pretty kitties at the Inyo Animal Shelter
Author Butler at ECM this Sunday
2 Comments
Newest
Oldest Most Voted
Inline Feedbacks
View all comments

Such a waste of nice breasts. All you need to do is cook it thoroughly and don’t use the same utensil to take the cooked meat off the BBQ as you use to put it on with (or the same plate etc).

Food born disease acquired in restaurants is one reason why I don’t go to restaurants. There are others.