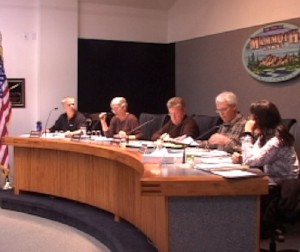 Council candidate Kirk Stapp and others had appealed the project with the contention that the community benefits and incentive zoning policy is out of step with the town general plan. This CBIZ policy allowed the developer to build extra units and not have to pay developer fees on those units in exchange for amenities that are designed to benefit the community such as conference space, out door plazas, and underground parking.

The Planning Commission signed off on the project in March after what was said by some to be over fifty public meetings on Old Mammoth Place. The current plan for the site on Old Mammoth Road is to allow the developer to build a project that has 488 lodging rooms, eight units of on-site workforce housing, outdoor public events areas, retail space, restaurants, underground parking and a spa.

Discussions centered on the issues surrounding the CBIZ policy, though issues such as the availability of water for the large project were also brought up by members of the public. At one point councilmember Wendy Sugimura agreed that some of the town policies needed work, but in the end the council upheld the Planning Commission’s approval of the Project. Jo Bacon had to recuse herself from the discussion. The vote was 3-1, with Skip Harvey in the dissent.

We work to provide daily news to all of the Eastern Sierra, in the tradition of Eastern Sierra News Service and the Sierra Wave. We bring you daily happenings, local politics, crime, government dealings and fun stuff. Please contact us.
View all posts by News Staff →
Land Negotiations for a New County Office Building in Bishop
Bureaucrat Beat: Robin Hood, Secrecy and DWP Angst