The Olancha Volunteer Fire Department arson investigator will be working with the Inyo County Sheriff’s department in determining the cause of a house fire that resulted in a fatality on Ray Lane in Dunmovin on New Year’s Day. 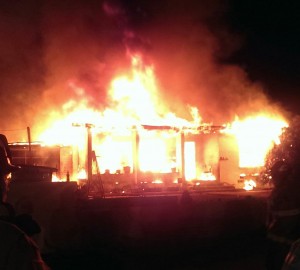 According to Olancha Fire Chief Steve Davis, the call came in at 5:07 p.m. January 1. When the firefighters reached the scene the brick and mortar structure was completely engulfed in fire with flames reaching 40-feet high, Davis said. Units from Lone Pine Volunteer Fire Department and Cal Fire also responded.

No official identification of the fatality has been made. According to Davis, the body will be fully autopsied in Orange County.

As to the cause or details of the fire, “we’re not running anything out,” Davis said.