The Owens River Water Trail has friends in high places. Bishop’s Randy Short serves as vice chair of the California Boating and Waterways Commission, a potential funding source for some of the project’s infrastructure, specifically handicapped-access to the river trail. 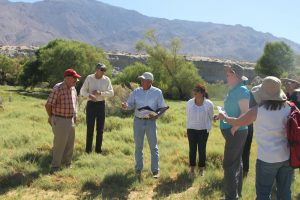 Randy Short, center, started off the Boating and Waterway Commission tour of the Owens River Water Trail project Tuesday morning. Short is vice chair of the Commission and a member of the board of the Eastern Sierra Waterways Project, the organization that brought the water trail project concept to the Inyo County Water Department.

Short and the commissioners were in the Eastern Sierra Tuesday to hold their regular meeting and tour both the Owens River project site and Silver Lake’s access solutions.

The project was awarded a $500,000 River Parkways Grant from the California Natural Resources Agency in late July. The Eastern Sierra Waterways Project, one of the late Dick Noles initiatives, brought the concept to the County. Short sits on that board as well.

The trail starts at Narrow Gauge Road north of Lone Pine and ends, 6.3-miles later, at Keeler Bridge. Geo-mats will be used at the input to maintain the environment.

The river has a flow of 40 cubic feet per second, appropriate for canoes, kayaks and even paddle boards.

Freilich provided a timeline starting with the California Environmental Quality Act study in the next five months. The handwork could start as early as next summer with the excavation in the fall and winter of 2017-18.

But the project still has a few roadblocks to get past. The County is waiting for the grant agreement from the granting agency and has to work out a site control agreement with the Los Angeles Department of Water and Power before the costs of the project can be reimbursed.

LADWP expressed concerns during the grant application process and still has those concerns according to an August 1 letter from Aqueduct Manager Jim Yannotta. LADWP wants a “project description that fully describes implementation methods and any facilities that are anticipated to accompany the Water Trail.”

The department also requested a description of how the project would be operated and maintained and an analysis of environmental impacts.

The project construction plan, already vetted by a potential contractor, was discussed at a meeting between the County and LADWP staff. According to Freilich, the documentation answered all of LADWP’s immediate questions.

The project and possible issues were also discussed at the Inyo County Water Commission meeting early this month. Freilich reported that issues with the lessee, Shainhower Ranch, were being worked out.

Former ranch manager Tom Noland was at the Commission meeting as well as the site visits. Freilich claimed he’d wrapped Noland in a wet suit, put him in a boat and floated him down the river.

Commission Chair Mike Prather said Los Angeles was concerned the County was going to keep opening up the whole 60-plus stretch of the Lower Owens. “What we see is more of a mosaic of activities,” Prather said. “In the long view, we have to stand together with the city to solve some of the issues on the river.”