By News Staff on January 13, 2021 in General Misc. Stories, Obituaries 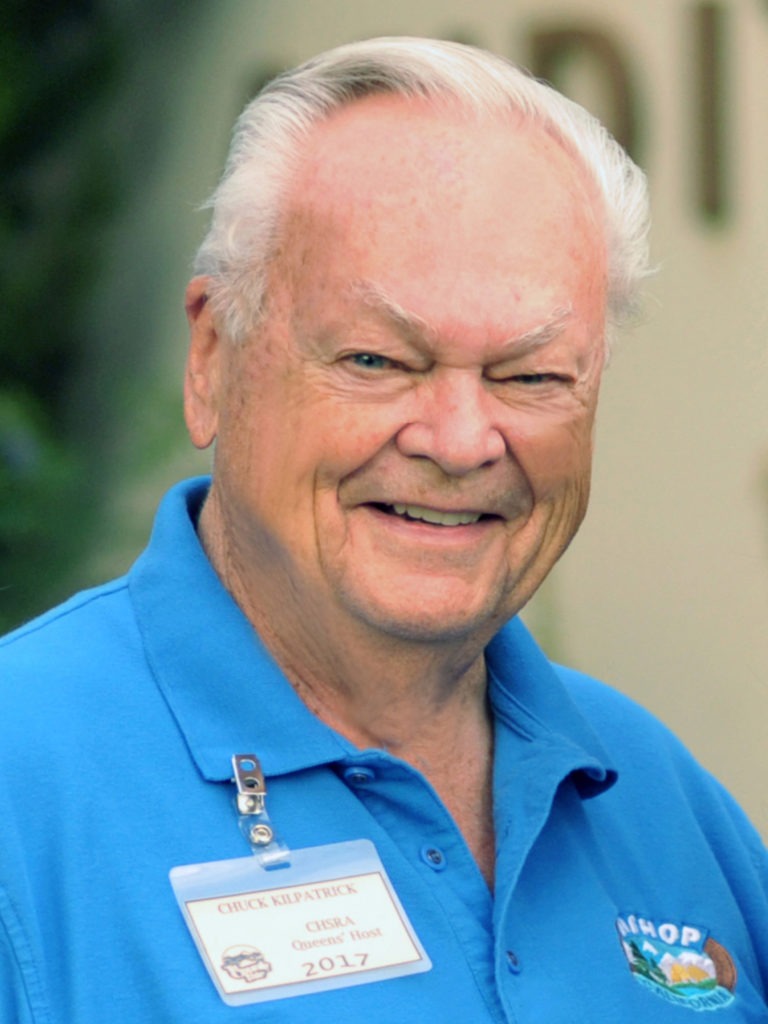 Farewell to a dear old friend to many. Compassionate, loving, helpful, and enthusiastic community leader and volunteer, “Chuck” Kilpatrick.

Chuck, (known as Charley on the East Coast) was born in West Atlantic City, New Jersey, to Lillian and Charles Kilpatrick.

He had a girlfriend in the eighth grade by the name of Mary Mae Gibson and so, the love story began.

Chuck’s life took a rapid turn when his father died at age 32.  Chuck was 13 when his mother moved him and his two younger sisters, Betty and Dorothy, from Pleasantville, New Jersey, to Goldfield, Nevada, to be with their grandmother, Nettie Wills, who was postmistress and ran a boardinghouse.  There, Lillian again found love and married the remarkable geologist, Clair Kunkel, a WWII Bronze Star Medal vet, who soon became a surrogate father to Chuck and the girls.

In 1950, the new family relocated to Sparks, Nevada, where brother Clair was born.  1951 saw them relocate to Rovana, a small mining village in California, at the foot of the Sierra Nevada mountain range (Mt. Tom).  It was here, attending his junior and senior years at Bishop Union High School that Charley, soon to be known as Chuck, would appear, participating in the sports programs, becoming an avid skier and later, an accomplished scuba diver.  In high school, Chuck was the social media.

After graduation he went to work for Union Carbide Corp as a clerk.  He then volunteered for a tour of duty in the U.S. Army 178th Replacement Co. from 1954 -1956 and was stationed in Germany, returning to New Jersey in November to marry his childhood sweetheart Mary Mae in December. Chuck returned to Rovana in February to his job with Union Carbide where Mary Mae joined him, accepting a teaching position with Round Valley Elementary School after graduating in June 1957 from New Jersey State College.

During Chuck’s years at Union Carbide, he fathered and welcomed his two daughters – Kimberly & Tammy.

He was involved with the Pine Creek Lions Club, fast-pitch softball catcher and tournament announcer, coached women’s softball, refereed basketball games and tournaments for Rovana and Bishop and worked part time for John Manterola’s and Tony Alva’s Texaco station and later, was a fixture at the Bishop City Park Pool, timing events for his daughters’ swim meets.

One of the joys of his life for 37 years was taking care of people in his State Farm Insurance Agency and for many of those years, having his daughter Tammy working by his side.  He began his agency helping others and so the list continues.  He served on the Inyo County Sheriff’s Posse, helping to conduct search and rescue missions, enjoyed being a member of the barbershop community singing bass in his own quartet, The FourTune Tellers and sang with the Chet Ullom Singers, The Presbyterian Choir, numerous Playhouse 395 productions, most recently the First United Methodist Church Choir, sang the National Anthem for the High School Rodeo, Destruction Derby and Mule Days and until now, for decades, was one of the parade announcers and volunteers for both Mule Days (being named Best Friend of Mule Days in 2017) and the Lone Pine Film Festivals.

He served and was instrumental on committees such as:  Blake Jones Trout Derby, Trout Opener Press Reception, Christmas Program – a beautiful Santa Claus, and the California High School Rodeo Association. Many of these events over the years saw Chuck cutting and serving bread and goodies donated by Erick Schat’s Bakkery.  In 2009, Chuck was named Inyo County’s Citizen of The Year.  He was publicity chairman for Bishop Community Concert Assoc; chairman of Bringing Businesses To Bishop; committee member for the Kern Hudson Medal of Honor Monument in front of the Chamber of Commerce building and a proud member of the American Legion Inyo Post #118.  A member of the First United Methodist Church, Chuck was chair of the endowment committee, a member of the building committee, assisted the church auctions as Emcee and the impressive list here goes on.

Bishop, The Owens Valley and Inyo County were Chuck’s very being.  He pursued all this valley has to offer.

He enjoyed pheasant hunting with his Brittany, camping and fishing with his family and dear friends, and later traveling in the motorhome with Mary Mae.

You never really heard Chuck ask if you needed help.  He just helped. Thank you for loving him.

A titan, genuine, unrelenting and exceptional, Chuck loved his family and this community.

In the future, when the pandemic lessens, a memorial celebration of life will take place September.

In lieu of flowers, if you wish, make a donation to the Northern Inyo Hospital Foundation.

I had the absolute pleasure if knowing Chuck’s step-father Clair when I moved to Big Pine in 1986. He was an amazing man, so kind and giving. It was an honor to know him.
What a lucky family to have had two amazing men blessing them.

I have never met Mr. Kilpatrick, yet as I read, Mr. Kilpatrick was a wonderful man. As in all counties, we’re losing a lot of the people that made our communities such a great place to live.