By News Staff on October 7, 2014 in Government Agencies/Utilities 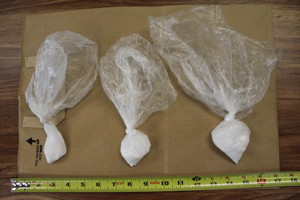 On Monday, October 6th at approximately noon Agents with the Inyo Narcotics Enforcement

During the contact, Alberto Flores took off running and ignored the Agent’s commands to “stop”.  Flores ran through traffic across Main Street as INET Agents and Officers from the Bishop Police Department pursued on foot.  As Flores was running, Officers noticed he had a plastic bag(s) in his hand.

Flores was apprehended by Bishop Police Officers in front of a residence on Hammond Street.  Agents and Officers then searched the area where Flores was taken into custody and found three plastic bags containing

Missing hikers found
Letter to the editor: No on Prop. 47
2 Comments
Newest
Oldest Most Voted
Inline Feedbacks
View all comments

Thank you, now that’s a Safe Neighborhoods and Schools Act!

That meth is baaad news