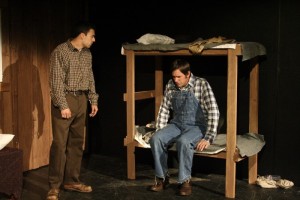 Of Mice and Men opens Oct. 8, 2015, and runs through Oct. 25, 2015, at the Edison Theatre, Thursdays through Sundays. Adapted by Steinbeck from his novel of the same name, the haunting play follows George and Lennie, two of the many migrant workers searching for a better life during the Great Depression. The unlikely and protective friendship between the two resonates as they strive for their piece of the American dream.

“Of Mice and Men is a compassionate and universal statement of friendship, mutual support, and survival,” Mammoth Lakes Repertory Theatre Artistic Director Shira Dubrovner said. “With heartrending characters, it is a tragedy that has relevance today.”

Because Steinbeck’s novel is taught in high schools, Dubrovner said she anticipates about 350 high school students from Coleville, Lee Vining, Mammoth Lakes, and Bishop will attend a performance during the run at a reduced student rate, made possible by generous donors.

“Mammoth Lakes Repertory Theatre is absolutely thrilled to be an educational component for our local high schools, offering $10 tickets, and supplying educators with a teacher’s resource guide to blend the theatre-going experience into their curriculum,” Dubrovner said. “We hope it provides an additional opportunity for high school students to engage with John Steinbeck’s timeless tale in a complementary medium.”

The production is directed by Dubrovner. Assistant Director is Shaun Reitman.

Of Mice and Men runs Oct. 8 through Oct. 25, Thursdays through Sundays, at the Edison Theatre (100 College Parkway in Mammoth Lakes). Show times are at 7 p.m. with Sunday matinees at 4 p.m. Tickets are available online for $20, $18 for seniors and students, $10 for children 14 and under.

Tickets are $22 at the door. To purchase tickets online, visit www.MammothLakesRepertoryTheatre.org.

“Tell me again about the rabbits, George”….

Awesome book, I can’t wait to see this play!