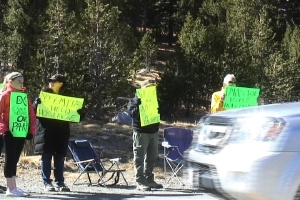 The Government’s Shutdown of all National Parks has angered both tourists and locals of the Eastern Sierra alike and one Mono County resident decided to, “take a stand.”  Stacey Powells of Mammoth Lakes has been best known as News Director of KMMT-FM, but last Friday she decided to get out from behind the microphone and pick up a protest sign. Taking a page (or at least the name) from the “Occupy Wallstreet” movement, Powells started her own movement called “Occupy Yosemite.”

Powell’s original plan was to rally a crowd at the Tioga Gas Mart and lead a convoy into Yosemite Park eventually stopping at Toulomne Meadows. The sparse crowd that showed up at Tioga Gas Mart and rumors of heavy resistance from the park staff derailed Powell’s initial plan. After waiting for more participant’s for awhile, a group of about fifteen, which included Mono County Supervisor Byng Hunt, headed to the gate. Upon arrival the small band of protestors were not met with the opposition that they expected.  The park staff had indeed heard about the protest , however, their instructions were not to keep the protestors out of the park. Tom Medema, Chief Ranger for Interpretation and Education, met the group at the gate and informed them that they would allow the group to come in temporally and set up in a safe place along the road to express their opinions. Medema was quoted saying, “it is never easy to have to keep people out of the park.”

While the protestor’s were permitted to park inside the park, “Occupy Yosemite” ended up taking place right outside of the entrance.  Holding signs and calling out to those entering the park, the Protest was received very positively by both the park staff and those passing through Yosemite. Many travelers honked their horns and took pictures and a few travelers  stopped their cars and got out to show their support. While the “Occupy Yosemite” movement didn’t turn out how it was originally planned, at least some people decided to speak out about these beautiful parks not being open to the public due to the Government Shutdown.

I thought this article summed it perfectly. The Park Police Jonathan V. Last October 21 “We are a nation that has a government—not the other way around.” —Ronald Reagan The conduct of the National Park Service over the last week might be the biggest scandal of the Obama administration. This… Read more »

From your statement, it appears the bureaucracy, not the President, has long held the view (you said the year 2000 and it was probably way earlier) that they control the public. This is one of the obvious characteristics of bureaucracy. Look at our own local bureaus. The organization begins and… Read more »

Benett….Isn’t it President Obama’s fault for EVERYTHING going wrong now?…..Let’s see what happens with the mid-term elections coming next year…We’ll see who the American people will be blaming for this shut-down…..my guess is ….time to” take out the garbage” in the Senate and the House to where they all can… Read more »

Pedro
Reply to  Socialism is slavery

I’d say Obama’s biggest scandal is lying about his intentions in Iraq and Guantanamo. Seen one president, seen them all.

Thank you Sierra Wave, Rob Gill, Benett, Bob T., for bringing this to light. We are not finished with this…stay tuned!

Protesting a park closure during a period when there is no appropriation bill to fund government operations is a waste of energy in my opinion. We have far more important problems that need attention, not the least of which are the influence of money in politics, our failure to enforce… Read more »

But it sometimes takes government acts that are obviously close to home to really enrage people and prompt them to action.
BK

Our land and natural resources are the foundation on which the house was built. It is one of the first things we should expect our leaders to protect.

You are picking an argument with the wrong group. They are every bit as much the victims as the motel owners in Lee Vining. I don’t know how many rangers you get to interact with but the ones I have met have all been good hard working people. But if… Read more »

DT, You are bit off point with this one. Show me one instance of protest or abuse directed at Yosemite staff. This article states ” Protest was received very positively by both the park staff and those passing through “. If you have proof otherwise then document your claims. Otherwise… Read more »

Good job Stacey!
For some reason “we the people” have become so complacent like things will work themselves out?
Hey “we the people!” Democracy is not a spectator sport!

Thank you Stacey. A fair amount of attention for your group size. Exercising our rights is good for everyone.

When I first read the headline i thought it was saying that the occupy yosemite protests had been shut down.

Yeah. I just saw how that could be confusing. Will change it.
Benett

I think I would have picked another name for the event 😉

Seriously Mark? but the original Occupy movement was protesting how big banks can trade the most risky loans “derivatives” of OUR tax payer money and privatize all the gains but make “we the people”‘ pay for the loss’s, Yes I understand the mainstream medias blasted the general public with all… Read more »