By Press Release on October 18, 2021 in General Misc. Stories 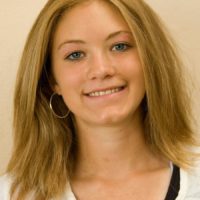 Layla Mae Bradley was born on March 2, 1992, in Cody. She came barreling into the world, early and fast, and had a rich childhood growing up with views of Heart Mountain and the McCullough Peaks from her expansive backyard.

Layla loved the outdoors and would seek places to work and study that gave her opportunities for hiking, camping, skiing and rock climbing. It’s not a stretch to say that Layla was a risk-taker who enjoyed anything that might lead to an adrenaline rush! This became fully realized when she chose as her life’s avocation to be a Wildland Firefighter.

Since 2018, she was employed by Dragon Fighters Inc. based out of Clark and sent to sites throughout the country. During this time, Layla worked her way up from crew member to engine boss and gained the respect, admiration and love of her employers.

She was known for “running a tight ship,” and motivating and training her co-workers. Layla impacted many people across the country that never even met her, many of whom owe their homes and businesses to her efforts and tenacity in protecting them.

Layla was extremely athletic. She participated in many sports, including volleyball and baseball in high school in Powell, as well as rugby in college in Colorado. Working out was a daily part of her life. Encouraging others, like her family, friends and co-workers, to follow their own regimens, was her way of helping people take care of themselves.

The Bradley home was always filled with music and Layla’s tastes were diverse, including folk, classical, rock, blues, hip-hop and country. The whole family, Burt, Janet, Sierra and Layla would often trade and share music they enjoyed. When it came time to choose an instrument, Layla selected the trumpet, perhaps inspired by Louis Armstrong, which she played with gusto in the Powell High School jazz band.

Although she hadn’t yet reached 30 years, Layla’s impact on her family, friends and communities in which she lived was deep and lasting. Her friendships go back to her childhood. She remained in contact with treasured teachers, mentors, and friends from elementary school through college in Powell and Colorado.

She was a gifted writer who wrote poetry and letters, and communicated faithfully, whether by phone or text, with her family and closest friends. On social media, she wrote “Live like there’s no tomorrow,” and that’s what she did. Her family and friends used words like “fierce,” “brave,” “real,” “spontaneous,” “generous,” “goofy,” “unique,” “compassionate,” and “deeply loving and caring.”

When situations were tough or challenging, Layla stepped up to the plate. She accepted being the responsible one with grace and skill.

Layla died unexpectedly in mid-afternoon on Monday, Oct. 11, 2021, just outside of the small town of Bishop, Calif., where she and her crew had been on a firefighting assignment.

Left to grieve this unfathomable loss are Layla’s mom Janet Reed-Bradley of Powell, sister Sierra Bradley Warfel, her husband Maris,  their son and Layla’s beloved nephew Dylan, of Billings, brother Burton J. Bradley and nephew and niece, Alex and Sofia of Olympia, Wash., uncles Tim Bradley of Seattle, Wash., and Dennis Bradley of Granite Bay, Calif., aunt and uncle, Nancy and Terry Morgan of McDonough, Ga., and their children, Jessica Morgan and family and Terri Jean Ragan and family, aunt Ruth Morgan of McDonough, aunt Deb Reed and cousin Ivy Eagleton and family of Powell, and so many friends and relationships that Layla cherished throughout her life.

Preceding her in death were her dad Burt Bradley, who passed away in January 2021, grandparents Betty and Gordon Brookhart, Burton H. Bradley, Norma and Donald Reed and uncle, Terry Reed.

Layla was most proud of the work she did as a firefighter. It was her life’s passion. With that in mind, her family requests that for those who so desire, gifts can be made in Layla Bradley’s name to Wildland Firefighter Foundation, ffoundation.org.

A memorial service to be held in Powell will be announced at a later date.

Anyone know what the cause of death was in this seemingly healthy and athletic young women?

As a retired wildland firefighter and Fire Captain I still follow California’s wildland fires closely. Not only had I heard nothing about this sad loss of a young firefighter (until reading this article), I’ve found nothing to explain the circumstances. That’s troubling. I hope she didn’t suffer. My condolences to… Read more »

As a family friend I was trying to figure out what had happened and couldn’t find anything until now. She will be greatly missed.

Well what did happen then if you don’t mind me asking? I was there