Martha Dean Jackson Jeffs was born September 2, 1926 in Los Angeles and passed away March 26 in Reno after a brief illness. 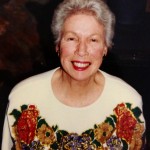 The youngest of five children, Martha was a popular and vivacious student at Fremont High School, where she met her true love, Ralph.

After they married at the age of 19, Ralph was ordained and they served the Episcopal churches in and around the San Joaquin Valley for many years, eventually moving back to LA where Ralph was a chaplain at USC and Martha graduated from college with a teaching degree.

Martha taught English Literature at Jefferson High School in the inner city for many years. In 1974, Ralph and Martha moved to Mountain View and served at St. Timothy’s Episcopal Church until 1995.

They retired to Bishop to be close to their children and grandchildren. Martha lived her faith and gave herself to all around her every day.

Martha Jeffs is survived by her sister, Betty Schneider, son Paul Jeffs of Grass Valley, daughter and son-in-law, Ann and Steve Kothman of Bishop, grandchildren Brendan, Caitlin, Zoe and Graham, and great grandchildren Alexis and Brody, and many nieces, nephews and extended family.

A memorial service will be held Saturday, April 5th at 11 a.m. at St. Timothy Anglican Church in Bishop. A celebration of Martha’s life and faith will be held in the Parish Hall following the service.

Services are at Big Pine Cemetery Sat. April 5th with a memorial service following at the Kingdom Hall of Jehovah’s Witnesses at 11 a.m. at 2935 N Sierra Hwy. Bishop CA.

“I was born, I lived, I died, Goodbye.” Arthur worked as a dispatcher for the California Highway Patrol for 35 years. He was a member of Eastern Sierra Wildlife Care, and the Manny Stein Club. Arthur had a love and hobby of collecting snakes.

No services planned at this time.

We work to provide daily news to all of the Eastern Sierra, in the tradition of Eastern Sierra News Service and the Sierra Wave. We bring you daily happenings, local politics, crime, government dealings and fun stuff. Please contact us.
View all posts by News Staff →
MCWD: improvements on the way
More on solar concerns