By News Staff on December 4, 2012 in Government Agencies/Utilities 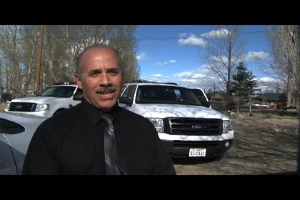 In early November, Mono Sheriff Rick Scholl confirmed reports that he would retire in December. He had said that he would now put family first. Sheriff Scholl’s term continues into 2014, and his Undersheriff confirms that the Mono Supervisors will vote to appoint him to fill that spot.

The Mono Supervisors discussed appointment of a Sheriff at their meeting Tuesday. When asked about his possible appointment, Undersheriff Ralph Obenberger said that the Supervisors “discussed it as an agenda item today, and the actual vote will be next tuesday with swearing-in to be immediately following.”

Obenberger said all of the board members favored his finishing out the Sheriff’s term through 2014. Obenberger would take over the position of Sheriff at current Sheriff Scholl’s retirement, December 20th. The seat would then go up for election at the end of the term.

Asked how he might fill the vacancy of undersheriff, Obenberger said, “I advised the Board, that if I receive their appointment to finish out the term, my intention would be to promote Lieutenant Robert Weber.”

According to the Mono Sheriff’s website, “Undersheriff Ralph Obenberger began his Law Enforcement career in 1985 with the Los Angeles County Sheriff’s Department. In the year 2000 he moved his family up to Mono County and started his Mono County career as a June Lake Resident Deputy.

“Over the past years,” the website says, “he has worked a variety of assignments with both Departments ranging from Field Training Officer, Dispatcher, Special Assignment Deputy, Helicopter Observer, Sergeant, Lieutenant and Chief Deputy Coroner. He was promoted to his current rank of Undersheriff in January of 2008.”

Why not appoint Obenberger as Sheriff? He had been running the show for years and Scholl said he has done a great job! God forbid that anybody would ask any questions before approving his appointment….. Does County Counsel make a recommendation? Why have so many deputies left the department? I… Read more »