On the evening of Saturday, July 6, 2013, Mono County Sheriff’s Dispatch received a call regarding two overdue climbers in the Laurel Mountain area.

A couple, ages 31 and 32, from Oakland, CA, were climbing the Northeast Gully of Laurel Mountain when they failed to return from their climb and were reported overdue by friends. 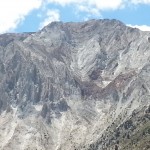 At approximately 10:30 pm, on Saturday, July 6, the Mono County Sheriff Search and Rescue (SAR) team was called out to search for the overdue climbers. One group of SAR members attempted to determine the location of the climbers via light signals from Convict Lake.

Another group of SAR members drove the Laurel Lakes road in case the climbers descended in that direction. Neither SAR group was successful in locating the climbers. It was determined that air resources would be needed in the morning and the search was concluded for the night.

On the morning of Sunday, July 7, 2013, the SAR team staged at Convict Lake. SAR members scanned cliffs, hiked, and drove to high points in the area hoping to spot the climbers.

A team began climbing the Northeast Gully route while another team ascended the other side of Laurel Mountain. After several hours of searching, the climbers were located by a spotting scope from Convict Lake. The climbers were off-route and halfway up the mountain. SAR climbers continued to climb toward the couple.

A National Guard helicopter, from Mather, was able to fly in and extricate the couple and SAR climbers to safety. The overdue climbers were dehydrated but otherwise uninjured.

The climbing in the Northeast Gully is not technically difficult, but the route is long and requires good route finding skills and experience. Off-route, the rock becomes loose and the terrain is steeper. Per the Mono County Sheriff Search and Rescue (SAR) team, there have been two other rescues on this route in the last ten years due to climbers becoming stranded in steep, loose terrain. The Mono County Sheriff SAR team would like to remind climbers to not be deceived by the easy technical rating of this route and to gain experience on shorter alpine routes before attempting this climb.

The party that can sway the immigrants and minorities to voting for them is the party that will win every time.

Never ceases .. the bullshit about liberals and conservatives has to come out in articles like this. Yes … thanks to the volunteers that help in time of need.

until republicans decide to give illegals free life in the u.s. and unemployment and welfare to every moron that doesnt want to go out and work,democrats will rule

You are too funny, Ferdinand lopez – I’m sure that is your real name : ) Meanwhile, in the REAL world: “The laws governing the immigration system aren’t working. The system is broken. I don’t intend to get involved in the politics or the specifics of policy, but I do… Read more »

And speaking of Bush ...
Reply to  Seeing the light

“Immigrants create far more businesses than native-born Americans,” he said, adding, “Immigrants are more fertile, they love families, they have more intact families, and they bring a younger population. Immigrants create an engine of economic prosperity.”
– Jeb Bush speaking to conservatives as to why they are going wrong.

That’s funny you admit that the republicans have to take back past stances in effort to pick up votes, because it is very obvious the republican platform of ideologies is on the wrong side of history. Sorry conservative republican voters, if your a die hard republican, your on the wrong… Read more »

Very good, J-Frog. Impressive and well-thought out facts. The political climate of today shows us the group that is losing is the one doing all the shouting. This childishness only appeals to the other children who instead of offering solutions they prefer to stereotype, degrade and demean gay people, blacks,… Read more »

I doesn’t really work that way. You don’t get unemployment unless you have worked. “Every moron” doesn’t get welfare. Have you tried it? You have to be really broke. Living on the street broke to get welfare if you are single. But it’s said that there are 11 million illegals… Read more »

But Ken how do we really see that securing our border is priority number 1? There’s enough to go around man, if we had a representative democracy we wouldn’t be shoving the blame in the wrong areas when we know the problems have started from the terrible DC policy’s that… Read more »

I agree — in principle — with everything you said.

There are times when I would prefer a dictatorship if the dictator was benevolent. We already have a Royal Class. Talk about entitlement. A benevolent dictator could at least get something done.

Yeah no kidding. Now that i go back and read your initial comment, I realize I repeated you a bit. Excuse my amateur ways, But where I got all excited about was being aware that the immigration bill has added 46 billion (not officially) but the 700 hundred mile border… Read more »

And speaking of a dictatorship …
Dick Cheney for President!

Thanks again to the men and women from MonoSAR. It seems like they’ve had a busy season so far.

a big THANK YOU FOR YOUR SERVICE to the volunteers who actually suit up and show up when someone gets stuck – what is with all this other irrelevant BS when this article was about our visitors and our neighbors who went to help them?

Marilyn your so right…
Thanks to the efforts that make the difference!

Get used to it.

Send those liberals a bill for services

I don’t know Mark, I heard Reagan got lost on his way to the bathroom.

Good luck at the voting booth
Reply to  Mark

re: Mark Once again we have a regular poster doing his very best Rush Limbaugh/Ann Coulter tiresome comedy bit trying to deflect the actual subject towards the “Liberals (aka Democrats) are the Devil!” childish nonsense. They’ve been getting away with this BS for over a decade now, and it’s comforting… Read more »

J-Frog
Reply to  Good luck at the voting booth

Tourbillon
Reply to  Good luck at the voting booth

I’m proud of you. You made it, what, three days without foaming at the mouth about Limbaugh? No doubt you have had night sweats but relapses into dysfunction, regrettable as they are, can temporarily calm frayed nerves.

Until the Far-right, Tea Party, Neoconservatives, Limbaughites, et. al awake from their slumber and come to the painful conclusion that if they can produce a viable presidential candidate that represents themselves AND the majority of the voters in America – they will lose every election that comes along. They’d better… Read more »

The bloated, drug-riddled bigot, Rush Limbaugh, who buckskinned attorney once said this about – “A people-hater adored by people-haters” is making a fortune appealing to that sad group of people whose easy-to-push-their-buttons fascist/racist ideology is clearly losing each and every election. No sweat whatsoever, Tourbillon. Only slight amusement at the… Read more »

Show me a Tea Party candidate
Reply to  Tourbillon

Have to admit, when the Tea Party/Neocon people were making lots of noise before the national election an illusion was created that the country was leaning in their direction. But when their man got dumped on at the polls and was supported by the likes of Limbaugh, Beck, Palin, Hannity,… Read more »

Mark
Reply to  Good luck at the voting booth

“We do searches and rescues at any time,
in any weather,
for as long as it takes,
for free…”

I’m happy to know that MonoSAR’s ethics don’t align with yours Mark.

“Liberals”?? I’m not gonna give this a rest Mark, without calling it like I see it. “The Spectrum of Thinkable Thought” keep that in mind while I tread on the status quo.. It’s behavioralism 101. When there is incentives for a certain way of thinking, and reward them for thinking… Read more »

Fear not the conservatives
Reply to  J-Frog

You’re wasting your time J-Frog on trying to get our so-called “conservatives” to actually take the time and think about the issues. The “deepest” they can go is: “Conservatives (aka Republicans) are better than Liberals (aka Democrats)” But fear not. They are clearly in the minority. It’s an evolutionary thing.… Read more »

Fire away neocons
Reply to  Fear not the conservatives

Based on the thumbs-up/thumbs-down to various topics, one could safely assume the majority of contributors to this blog are of the right-leaning to far-right leaning caliber. Also, most of the talk-radio programs today pander to the right-leaning types. What is utterly fascinating to me is the high-ranking spokespersons for the… Read more »

Fire Away, actually the majority of posters here are liberty lovers who are not trapped in the left vs right paradigm like you are. They are neither “Liberals” or “Neocons”. They pretty much want to be left alone by government agencies and do not want their country involved in wars… Read more »

No Dr. Facts, it’s your rants about liberals and neocons that gets the thumbs down. You’re the only one here who seems to rant .. and about the same old crap … You do pretty good in your mission of division.

Fighting fire with fire
Reply to  Fire away neocons

Sorry Big Al, the only time the word neocon appears is after the word liberal appears.
It’s a fight fire with fire thing. Better get used to it.
And don’t think for a second liberals are going to roll over and play dead for the Limbaughites.

LOL Jerry, tell it like it is brother .. don’t spare the frosting!

Yet another well-thought out and meaningful contribution to this format from Big Al.
You are too much, Big.

Good trolling Mark! I was wondering how long it would take before he’d bite.

Yeah atta boy Mark, that’s how you get a fundamentalist point across, by trolling….

I regret pulling the cord.

So mark, how do you feel about the local patrol of our skateboard park? 🙂

@Mark – And of course the overused (and most certainly demonized) word “liberals” pertains to local issues only. (chuckle) Never assume liberals are going to take the demonization lying down, Mark. We may be tolerant of other points of view – but not to the extent of the non-stop bashing.… Read more »

Erik, nothing against Mark here, but getting the intolerant Crank of Many Names to “bite” and post yet another half-witted screed full of hate and bile is about as hard as getting a bite at a trout hatchery during feeding time.

Mirror, Mirror on the wall...
Reply to  Tourbillon

Why the childish “bite” games, Tourbillon?
Hate and bile? Half-witted?
Life is too short, my friend.
Do yourself a favor and turn off the talk-radio.
That’s where you’re getting the hate and bile.
It’s all done with mirrors.

Mark … tell me how it is you know they are liberals .. just because they are from Oakland?

Hmmm … let’s see …
a racist statement from Big Al
yet another ” I Hate Liberals!” slam from Big Al …
Feel any bigger, Big Al?
So, how do feel about the recent acquittal in Florida, Big Al?
(as if we don’t already know)