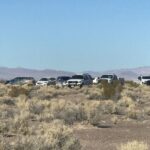 responded to the scene.  Salyer was arrested for first degree murder and transported to Inyo County Jail.  Salyer is being held on $1,000,000.00 bail.

The victim’s identity is being withheld pending notification of next of kin.  This is an open investigation and anyone with information is encouraged to contact Inyo County Sheriff’s Office at (760) 878-0383 option 4.

“Any landing you can walk away from is a good one” | Small plane crash in Bishop.
State of Inyo Roads and Campgrounds | What’s Open/Closed? (Oct. 14)
3 Comments
Newest
Oldest Most Voted
Inline Feedbacks
View all comments

Up until just a few years back , being Death Valley was (is) a National Park , you couldn’t even have a firearm in your vehicle unless it was taken apart & un-usable . Thankfully , that’s no longer the case. Also, Sheriff’s are being a little more lenient with… Read more »

Rick O’Brien Not real sure (maybe someone here in Law Enforcement could help with that ),but even a few years back,LE seemed to be kinda lax about the gun rules and regulations with someone choosing to carry a pistol when out in the wilderness and desolate areas,whether they have a… Read more »

Don’t know the circumstances of this incident,charge and arrest,but once again shows why it’s a good idea to carry a firearm,whether it be fishing,camping,hiking,etc. Vulnerability to those out in the sticks and wilderness if you don’t. Would never be a good thing to be confronted by someone that already has… Read more »