The National Transportation Safety Board website now reveals a preliminary report on the helicopter crash near Glass Mountain in mid-September. The report says that at a certain point the chopper “lost all power.” 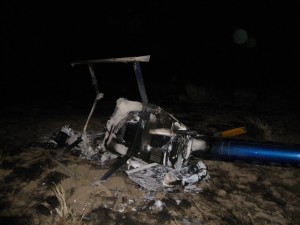 The NTSB report makes it clear that the preliminary information is subject to change as their investigation continues. That report says, “The pilot reported that at 6am on the day of the accident he and his passenger departed in the helicopter from their residence in Benson, Arizona.” The report says that the pilot, Robert Durham, had serviced the helicopter with aviation gas at a local airport the day before. Durham and his wife Natalie departed and stopped for more fuel in Lake Havasu followed by a second fuel stop in Jean, Nevada. The couple flew on from there to Bishop.

The report says that they filled their fuel tanks to capacity, “ate lunch at a restaurant located on the airfield and departed.” The report goes on to say that about 30 minutes after takeoff, the pilot “began to experience stomach cramps.” The NTSB says that Durham landed the helicopter at 8,600 feet in a meadow on the south slopes of Glass mountain. The report says he left the chopper running and got out. The report then says, “After relieving himself, he entered the helicopter and prepared for departure.”

The pilot said he raised the chopper to a 2 to 3 foot hover, rotating to the left to turn back and depart towards the descending terrain. The report says he accelerated through 10 knots and shortly thereafter, observed a caution light. Durham then said the helicopter lost all power.

He tried for an immediate landing. As the helicopter came to a rest, it began a roll to the right. The report says the main rotor blades then struck the ground and a rush of fuel passed through the cabin. The chopper burst into flames as the pilot and passenger got out.

Locally, the Mono Sheriff’s Department provided us with photos of the wreckage and said that Mr. Durham had managed to hike out to the Benton Fire Department. Mono Paramedics and Care Flight rushed to the area where they flew out the pilot and passenger to Renown Medical Center in Reno. The couple had been on their way to Truckee.

We work to provide daily news to all of the Eastern Sierra, in the tradition of Eastern Sierra News Service and the Sierra Wave. We bring you daily happenings, local politics, crime, government dealings and fun stuff. Please contact us.
View all posts by News Staff →
Local Governments Look for Ways to Downsize
Former Alpine County DA Goes to Work in Inyo