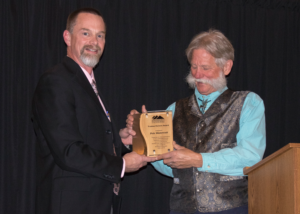 The Pete Watercott Award will be for an individual who through work and dedication
has advanced the social service fabric of our communities resulting in improved health
outcomes for the people of Northern Inyo.

The John Ungersma, MD award will be awarded to the person whose work in healthcare has exemplified our Mission of improving our communities one life at a time. 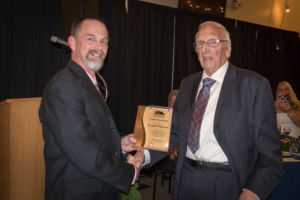 NIHD CEO Kevin S. Flanigan, MD MBA, presents former NIHD Trustee Dr. John Ungersma with recognition for his 18 years of service to the Healthcare District. Going forward, as a tribute to Dr. Ungersma, the NIH Foundation will award an annual honor spotlighting those whose work in medicine best exemplifies NIHD’s Mission of improving our communities, one life at a time. Photo by Laura Molnar/Northern Inyo Healthcare District

As the warm autumn sunset gave way to a chilly night, the evening became a true celebration of the individuals chosen by their communities and colleagues for the honors about to be bestowed.

In their acceptances, each would argue their contribution was simply being part of the NIHD team, simply doing their job, simply serving their constituents. Yet, as NIHD Chief
Executive Officer Kevin S. Flanigan, MD MBA, noted even a team needs a champion who
remains energized and focused when others begin to wane in their enthusiasm. These five individuals exemplify what it means to lead by example and to work with others to accomplish a goal.

That led to a five-summer stint working as a counselor at a summer camp for the disabled. There, she worked with the Muscular Dystrophy Association, leading her to an interest in medical genetics, the subject she would major in at the University of California, Davis. 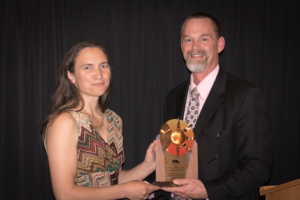 Dr. Helvie came to Bishop 15 years ago this month to work with long-time local pediatricians Drs. Alice Casey and Clifford Beck. She knew Bishop would become her permanent home in the first two weeks thanks to a supportive staff, receptive parents, and wonderful, young patients.

“I wish that I could really explain what a joy and a privilege it is to practice as a pediatrician,” Dr. Helvie explains. “Every day I use this gift of knowledge acquired through years of education, years of experience and from my colleagues and from my patients. I never know what I will find when I walk into the exam room, but I do know that I will be asked to help and that I will do the best that I can whether that’s a diagnosis, a treatment plan, education or just reassurance. That part of my practice hasn’t changed, and I hope that it never will.”

Dr. Helvie enthusiastically embraces the idea that to optimally care for an individual, one must also care for the community. She laughs at the many lists she keeps – improvements to make, recommendations offered, and a growing list of projects.

During her acceptance speech at the dinner, she received warms laughs as she rolled out a literal floor-length scroll of people she would thank for their support. She graciously thanked her parents, her husband, Thomas, and their sons, who she noted share her attention with a thousand some other kids and their caregivers. She also thanks the “ever-expanding pediatrics team, all equally dedicated to the care of our children, with a special thanks to the medical assistants who give all of the vaccines.”

Dr. Helvie also expresses gratitude to the many groups and individuals that share goals to improve the health of children in this area such as Team Inyo for Healthy Kids, First Five Commission, the early childhood intervention programs, and the NIHD therapy programs for the services they offer to children, some Dr. Helvie says she couldn’t have dreamed of even five years ago.

“I am proud to be a part of this network and to have a chance to help with the development of projects such as the NEST program for infant care and breastfeeding support, which took the dedication of many perinatal nurses who identified a need, and developed a program to fit our community,” she says. “The Bronco Health Clinic, which had been a dream for many years, only became a reality because of the hard work of Colleen McEvoy, our pediatric Nurse Practitioner, combined with the commitment of our healthcare district and school district to come together to improve access to medical care for our adolescents.”

Dr. Helvie says she cannot wait to see what can be accomplished in the coming years, as a community, as a healthcare district, and, of course, as an individual.

The 2018 DAISY Award for Nursing Excellence recipient is Abel Jones, a registered nurse who serves NIHD by providing care on the Medical/Surgical unit. He was nominated for the award by a patient’s family, Barbara and Paul Laughon, for the comfort care he provided to Barbara’s mother after she fell and suffered what would prove to be a fatal brain bleed. He was chosen for the award out of a field of more than six nurses. 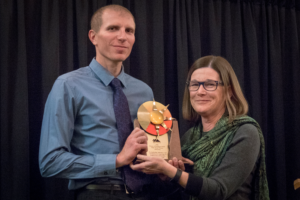 Inspired by the work of his mother, an Occupational Therapist, a teenage Abel Jones began his career path much like Dr. Helvie, by volunteering to work with children with disabilities. That led to a job working with troubled youth at an outdoor program in Lake Tahoe.

“Over the years I gained experience in various care-providing roles in different states and eventually wanted to go back to school to further my knowledge on the subject,” Jones explains. “I knew nursing would be great for me because I could continue to learn on a daily basis. There is no end to the knowledge one could gain in the field.”

After earning his Bachelor of Science in Nursing at the University of Colorado at Denver, Jones and his wife, Monica, an Occupational Therapist, came to live and work in Bishop.

“I really appreciate NIH’s comprehensive program for training and mentoring new graduates,” Jones says. “I received so much patience and guidance from all of the experienced and dedicated nurses that have mentored me along the way. I’ve learned something from every nurse I’ve come in contact with. I respect and am amazed by their dedication to our patients and the knowledge they carry.”

The secret to his compassion is two-fold. “I try to maintain a really positive attitude when caring for people.  It goes a long way in establishing rapport, and it makes those hard, emotional situations easier for my patients and I to handle,” he explains.

The second secret weapon is his wife, Monica. “We’ve been married for over six years and took turns supporting each other as we both went back to school for our current careers,” he says. “I can’t imagine being able to become a nurse without her.”

Jones says he was surprised to receive the DAISY Award. “I see so many great nurses in various departments that have positive attitudes and far more skills than myself, so it was hard to understand how I deserved the honor,” he says. “After reading the letter from the family, I recalled how deep and touching a moment in someone’s life I got to be a part of. I truly am honored to have been there and to have received this award. “

Lynda Vance was nominated as NIHD’s Employee of the Year for her recent work as the project manager overseeing the implementation of the Healthcare District’s new Electronic Health Record. 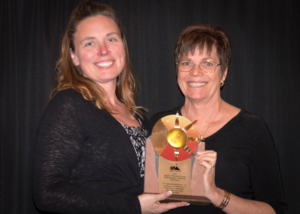 Lynda Vance, left, NIHD’s 2018 Employee of the Year, earned the honor in part for her role as project manager for the implementation of the Healthcare District’s new Electronic Health Record. Presenting Vance with her award is Robin Cassidy, NIHD’s Director of Information Technology Services. Photo by Laura Molnar/Northern Inyo Healthcare District

For the better part of the last 16 months, Vance has expertly communicated the District’s needs with more than 25 vendors involved in the new system. She also has coordinated and scheduled hundreds of hours of meetings and trainings, and as her co-workers
like to say, she did it with a smile.

Vance is quick to thank her husband, Jeremy, and sons Ashtin and Zander, for their love and support. “Without them, I would not be where I am today,” she smiles. “Our life is an amazing adventure, and I would not want it any other way.”

She went on to thank the teams she works with every day. “Your support has offered me a good working environment, and while this award is addressed to me, I truly feel your efforts in this team effort should not go unnoticed.”

Vance extends her thanks to Information Technology Services, Informatics, and all the committees she worked alongside during the launch.

As for Pete Watercott and Dr. Ungersma, District leadership was thrilled to surprise both with such individual honors. “Fiddlin” Pete Watercott was at the event as part of the Foundation Board, and to provide the evening’s music. Dr. Ungersma’s adult children arrived to accompany he and his wife to the dinner with nary a raised eyebrow … until the new awards were announced.

2019 will bring the first winners of the Peter Watercott Lifetime of Community Service
Achievement award and the Dr. John Ungersma Lifetime Medical Service Achievement Award, assuring that commitment and passion will once again be put center stage.

Monies raised through the dinner, its silent auction, and any donations made will benefit the NIH Foundation and its healthcare initiatives and services.

After a couple experiences and “procedures” I’ve had at NIH,I have nothing but very good things to say about the Doctors and staff…making things comfortable from the time you walk in the door,pre-ops,the procedures themselves,until the time they wheel you out to your waiting vehicle…