By News Staff on May 31, 2017 in Entertainment/Local Events/Activities, General Misc. Stories, Public Event

Armed with a can-do attitude that has undoubtedly seen this group through its 54 years, the Northern Inyo Hospital Auxiliary began a new year of service with the recent installation of its 2017-18 officers. 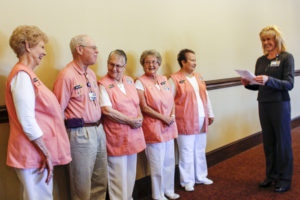 Judy Fratella will serve a second term as Auxiliary President with Richard Rogers again serving as Vice President. Sharon Moore will be the group’s Treasurer with Judy Speed serving as Recording Secretary and Carole Sample serving as Corresponding Secretary.

The purpose of the NIH Auxiliary is to render service to the hospital and its patients through ways approved or proposed by the Governing Board of the Northern Inyo Healthcare District.

During the past five decades those “ways” have included staffing the twice-a-year Blood Drive alongside United Blood Services; purchasing various medical equipment; holding drawings, teas and wine tastings; and, crafting afghans, baby quilts and clothes, all in the name of lending support to the county’s largest healthcare facility.

Kelli Huntsinger, Chief Operations Officer for Northern Inyo Healthcare District, swore the new officers’ slate into their respective posts. Huntsinger applauded the Auxiliary members for the incredible cumulative number of volunteer hours the group has accumulated during the past 35 years of its existence.

Founded in 1963, the Auxiliary began tracking its volunteer hours in 1982. Since that time, Northern Inyo Hospital Auxiliary members gave 195,363 volunteer hours and more than $536,000 toward equipment donations for the hospital.

The Auxiliary honored several members for faithful service during the installation. Those honored included Sharon Moore for her contribution of 15,055 hours of service; Nona Jones for 10,157 hours; and, Judy Fratella for 6,344 hours. Also honored were Shirley Stone for 3,152 hours; Vivian Mitchel for 2,500 hours; Betty Anziano for 1,539 hours; Richard Rogers for 1,000 hours; Cathryn Bahm for 1,129 hours; Betty Buckle for 592 hours and Judy Speed for 276 hours.

Equipment purchases offset by Auxiliary donations include this year’s gift of a Flexible Video Endoscope, which is used to secure airways in patients who are suffering respiratory distress.

Other purchases during more recent years include the Emergency Department’s Ultrasound machine, the Automated Breast Ultrasound machine which allows early detection of breast cancer in women with dense breast tissue, and a mini Immunoassay Analyzer, which increased the hospital’s ability to diagnose and treat bacterial infections.

The Auxiliary raises its funds through its hospital gift shop sales and through its popular Holiday Craft Boutique, which will be held at the District’s Birch Street Annex this year. New members and donations are always welcome. For more information, please call Cheryl Underhill at (760) 873-2153.