No through travel on Tioga Pass for this Memorial Day holiday. Too much snow, according to the Park Service. 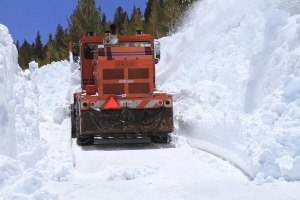 Caltrans crews and others plowed a path to the gate.

Scott Gediman of Yosemite public information said that this year Mammoth Mountain Ski Area sent down some plows and Mono County worked to clear the pass, too. Caltrans had earlier reported that a path was cleared on the road to the gate and work continued to further clear the roadway and shoulders.

Meanwhile, the Park Service works to clear the road on the other side of the gate. Gediman said that the unofficial word is that the pass will open in mid-June. Plows have had to work with a six-foot snow depth and deeper. The continued cool weather has prevented snow melt and made the going slower.

Gediman called it a double whammy with all the snow and then a cool spring. He said that the snowpack in the Merced River area was 199% of normal and the Tuolumne area, 130% of normal.